Day 98 of self-isolation - UK is reopening

Another delivery from Waitrose. With extra excitement - I'd just finished alcohol spraying the three gallons of milk, when the man with the van came back to explain that he'd unloaded part of someone else's order. Apparently, Ladysolly had not gone overboard on milk. So we gave him back the stuff that wasn't ours, three bags full.
The UK death number on Saturday was down to 43, from a high of 980 per day. This isn't quite as good as it looks, because the numbers are always low at the weekend, but it bodes well, and I'm hoping that the non-weekend numbers will be under 100.
So the reopen continues, and we all hope it goes well, because a second lock down just isn't going to fly. It will be so unpopular, it won't happen. But the numbers are comnig down, and it was always ging to be true the the downswing would be slower than the upswing. 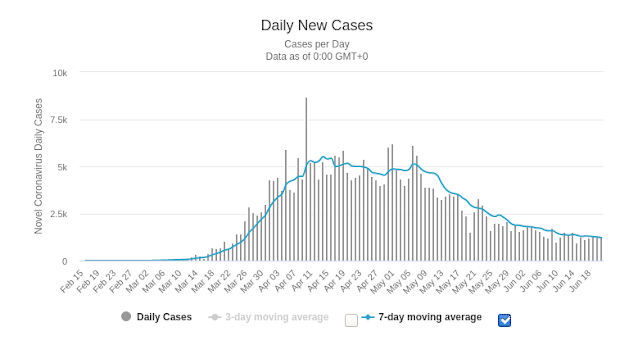