Day 94 of self-isolation - what happened in Iran?

What happened in Iran? 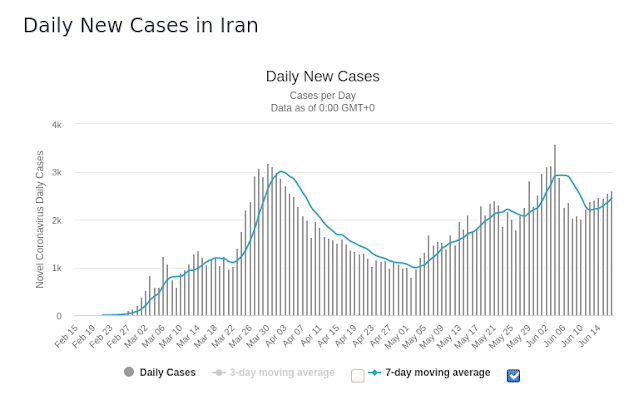 At first, like so many other countries, they didn't take the virus seriously. On Qom, there's a shrine that many Iranian pilgrims visited before returning home, carrying a feeling of holiness, a soul filled with joy and lungs filled with of Coronavirus. In March, a lockdown was declared - too late, as in so many other countries. By late March, the number of new cases per day hit 3000 and the total death toll so far was 2898.
But the economy was suffering. Iran was, once again, suffering under economic sanctions because of their nuclear program. Pre-pandemic, in November 2019, the regime put fuel prices up by 200% and there were mass protests and calls for regime change. The government reacted by killing 1500 protesters and shutting down the internet. But the lockdown was a serious additional blow to the economy.
In early May, new cases had dropped to 1000 per day, and deaths per day had halved from the peak. So the lockdown was eased. And, to the surprise of no-one, the number of infections started to climb.
Is there a cure? Some people thought there was. Prophetic medicine says that "black cumin seeds cure all diseases". Iranian cleric Ayatollah Tabrizian has written extensively on violet leaf oil as a cure, applied anally (I kid you not). Maybe some people believed this; most people laughed. Hossein Ravazadeh, another prominent quack, recommended bitter gourd oil dropped into the ears twice a day. Ayatollah Ali Khamenei, the supreme leader, says covid-19 might be the work of jinns (evil spirits) working with America. The remedy, therefore, is prayer and Quran recitation.
Several top clerics have died after relying on herbal remedies. They include Mahmoud Hashemi-Shahroudi, an ayatollah who was tipped to succeed Mr Khamenei, and Mohyeddin Haeri-Shirazi, another firebrand. In March a junior cleric, Morteza Kohansal, posted a video of himself in a hospital ward, not wearing any protective gear, applying the "Prophet’s perfume" to covid-19 patients. Hundreds of Iranians have died from drinking high-proof alcohol, which is wrongly believed to kill the virus. At least they didn't try bleach, as so many Americans did.
Ali Akbar Velayati, heads the Traditional and Islamic Medicine Group at the Academy of Medical Sciences in Iran. Mr Velayati went into self-isolation after showing symptoms of covid-19.
Iran’s best medical schools have opened departments of homeopathy. The health ministry requires apothecaries to study it for a year before getting a licence. Good grief.
The Islamic version of "evidence-based medicine" consists of examining the Quran and the Hadith, to see what the prophet recommends. Yes, really. There are academic papers on this.
So during May, the number of new cases per day was rising. And what did the government do in early June? Lifted controls on offices, mosques, shops and schools. The border with Turkey was reopened. No surprise - the pandemic is getting worse. 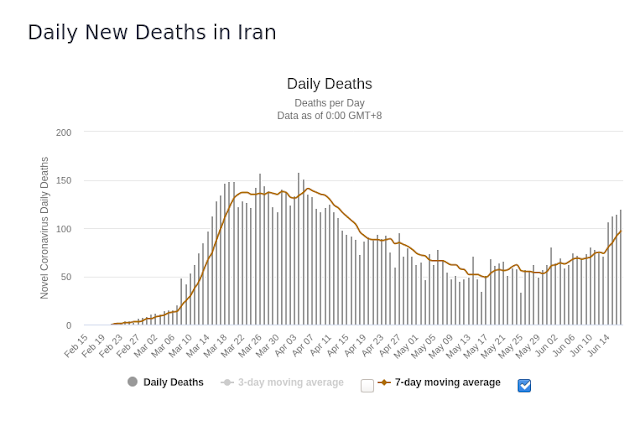 The daily death toll is rising. The total butcher's bill so far is 9272.
Will they order another lock down? I don't think so. The effects of a failing economy will be seen as far, far worse than the loss of a several thousand elderly people. A failing economy leads to protests, perhaps even rebellion. The regime is not as stable as it would like to be, so chancing another lock down looks unlikely. On the other hand, will people take to the streets in anger if several thousand grandmas and grandpas die? It's a cold calculation, but one that every country is facing.
Some countries show how the virus can be controlled; South Korea, for example. We can learn from how they went about it.
Other countries serve as a dreadful example of what not to do; USA and UK, for example. There, it was the blunders of politicians in not taking the virus seriously early on despite knowing what had happened in Spain and Italy.
But in Iran, the blunders of politicians were exacerbated by the unjustified faith of the ruling clerics. A lesson for us all.
Posted by drsolly at 18:39