Day 93 of self-isolation - a second lock down?

A second lock down?
It is clear that in some countries, the lock down did not do what was needed. In some countries, the economies were such that people who didn't work, didn't eat. In some countries, adherence to religion was more important that the lock down. In some countries, people were so focussed on their own freedom, that they forgot that we have given up the freedom to drive while drunk for a very good reason.  And in some countries, the leadership of the country was pathetically weak, didn't give good science-based advice, and didn't set a good example.
Some of the countries that are heading in the wrong direction, include USA, Brazil, India, Iran, Pakistan and Sweden. And that's looking at the situation in June.
I wonder what it will be like in November? In the northern hemisphere, winter draws on, and it's getting cold. People will be more indoors than outdoors, ideal for disease transmission. Every year there is "annual influenza" from October to March. So will there be a resurgence of Covid-19, even in the countries that have managed to pandemic very well up till now?
Will a second lock down be possible, either now or then? Will people be willing to make the same sacrifices, all over again?
I think, no.
Because we now know what the sacrifice looks like. 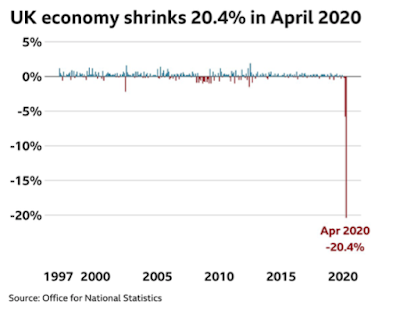 And individuals now know that the sacrifice feels like.
There has been too many people flouting the rules. When I'm told, "One rule for you, another rule for the elite", I respond with two words, of which the second word is "you!". Too many politicians who don't wear masks, too many politicians who don't stick to the rules, and too many protesters what have mingled droplets with no apparent consequences.
Dominic Cummings. That name will be used a lot.
And now we are more aware of the trade-offs. Yes, Covid-19 is a killer, but so are cigarettes. Cigarettes kill 220 per day - yesterday's deaths from Covid-19 were 184. Please explain to me why we haven't made cigarettes illegal?
We know that Covid-19 kills the elderly, and those with co-morbidities. We think that the death rate, if you get infected, is estimated at 0.25%, plus or minus 0.15%. But that is biassed; if you don't smoke and are under 50, that is much, much lower.
We didn't know that back in March, but we know it now. We also, at last, have a treatment for the worst cases, those so badly affected as to need a ventilator. Dexamethasone cuts the risk of death for those on ventilators, by a third, and this is a clinically proven effect, not some pious hope spouted by a bloviator.
The people most at risk (the elderly) are not the breadwinners. Many of the breadwinners have been without pay (or on low pay) for months, know what it feels like, and will not want to repeat the experience.
In countries that put patriotism ahead of selfishness, another lock down might have some support, but there are precious few such nations, and the more general attitude is "I'm all right, Jack". I think that a second lock down will be widely ignored. And, because politicians know that, it won't be ordered.
Posted by drsolly at 17:30