Bungles, blunders and butchery
There are many. Some mistakes were inevitable - we didn't know three months ago what we know now. But some were obvious even at the time.
UK
The first blunder was the late lock down. Even if a full lock down wasn't obvious, it was obvious to everyone that racing at Cheltenham on 16th to 19th March should have been cancelled, together with the mass attendance at football matches at the same time. How was it obvious? By looking at the situation in Italy and Spain, by looking at the infectiousness of the virus and by looking at the fact that we were seeing several hundred new cases each day on March 14. The lock down wasn't in force until March 23. My personal lock down was on March 17th, and would have been sooner except I had a tooth extraction on the 16th, and I'm glad I took that risk, because otherwise I'd have lived with a painful and broken tooth for months.
The next blunder was ordering millions of testing kits from China that didn't work, because they were the wrong sort of test kit.
This was followed by the blunder of releasing patients from hospital into care homes, at a time when it was already known that Covid-19 is fatal to the elderly. And with no PPE, and no isolation, it was inevitable that the grim reaper would tally a huge harvest in the care homes.
At about that time, there was a minor blunder. Boris Johnson visited a hospital and shook hands (exchanged viruses) with patients infected by Covid-19. This resulted in Bojo nearly dying of the disease, and in Bojo infecting other senior politicians. This was minor, because it only affected a few useless people.
The next major blunder, was on PPE. This turned into a major scandal, when it turned out that we were completely unprepared for an epidemic, let alone a pandemic. It was always clear that if a pandemic struck, it would hit many countries at the same time, and that PPE would be vital for healthcare workers. So the obvious thing to do, is have a stockpile that will be adequate. Obvious, but omitted.
The next major blunder was when senior politicians and medical advisers flouted the lock down rules. The first two times this happened, they were sacked (asked to resign, which they did at once). But when Dominic Cummings was found out, he stood his ground, wasn't fired, and that resulted in many people thinking, one rule for them, another rule for us. And that undermined the shared sacrifice.
An ongoing blunder is the failure to recommend masking; this has now become compulsory on public transport, but not in shops, parks and streets.
And then there's track-and-trace. There was supposed to be an app for that, trialled in the Isle of Wight from the start of May, but obviously the trial failed, because here we are a month later being told that the app won't be ready until the end of June, being told that this "world-beating and important" app isn't really needed after all, that we can do the job just using people paid to contact those who tested positive and ask them who they've been in contact with recently, ("No, I mean apart from your least favourite politicians") so that they can be phoned and asked to self-isolate. And will this work? It looks like security theatre to me. 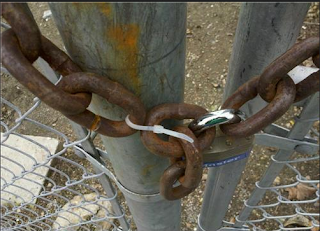 At this point, new infections have fallen substantially (but are still well over a thousand per day) and the death numbers have fallen from the 1000 per day peak, down to a couple of hundred. Still very high, but the lock downs are now eased to the extent that all shops are reopening.
Many people think that's too soon. And will track-and-trace work? 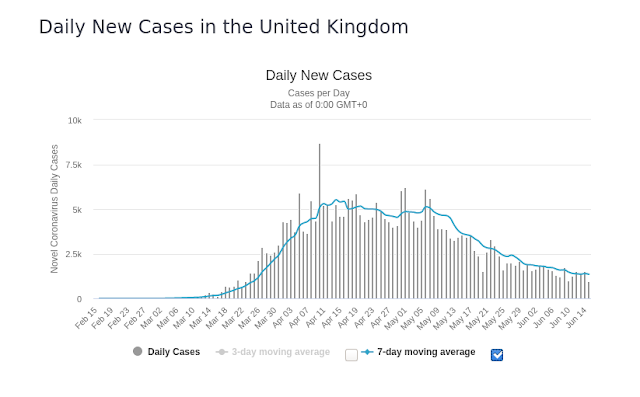 Sweden
The whole policy was a blunder. The idea in Sweden was to rely on the willing and voluntary cooperation of the citizens, thus avoiding the need for compulsory measures. And so Sweden would reach "herd immunity" without pain. Meaning, we'll sacrifice several thousand oldies.
It didn't work. Sweden has a death-per-million rate as bad as France, Italy and Spain, and is nowhere near herd immunity (60-90% is needed, Sweden has 10-20%). It also didn't work to protect the Swedish economy.
Sweden levelled off for a while, but is now seeing a severe upturn in cases. 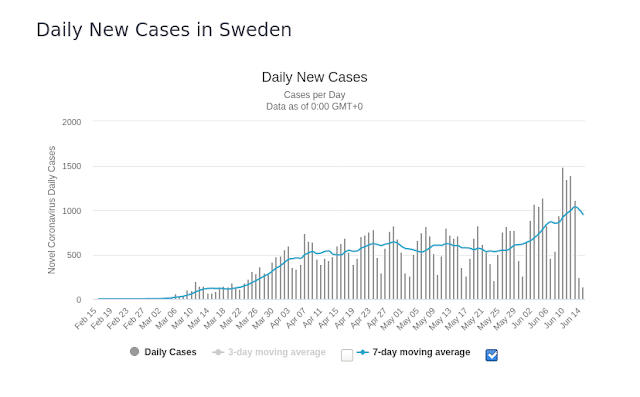 USA
The USA had two huge advantages. First, it could benefit from the experiences of China, Italy and Spain, because the USA got hit later than they did. The other advantage is the physical isolation of the continent.
The first advantage was thrown away when the government took the line that there's only a few cases and they will soon blow away, and that this was no worse than the seasonal influenza.
The second advantage was thrown away when the government assumed that the infections would be coming from China (a few did), whereas in fact the mass of infections were flying across the Atlantic to the East Coast. The European travel ban was delayed until March 13, and even then UK was exempted. The UK was added on March 16th. Too little, too late.
This was followed by weeks of pretending that the problem was minor, and would soon disappear as if by a miracle, and when it didn't, the government started pretending that Hydroxychloroquine would be the answer "Try it. What have you go to lose?" It turned out that what you had to lose, were heart problems, and also a lot of time wasted chasing this phantom cure. Plus someone died from it.
Eventually, lock downs were commanded. But there was very little provision for people to have any sort of income during the lock down ($1200 doesn't go far after rent and other payments). So, people quickly started chafing under the restrictions.
Let's not mention the suggestion from a senior member of government that people could be injected with disinfectant. At least that provided some comic relief at a grim time.
At which point, the US government poured gasoline on the fire by undermining the state governors and supporting the people who wanted to end the lock down. Also although the CDC recommended masking, top government refused to mask, which set the example for the rest of the country.
The most recent blunder is to open up too soon. 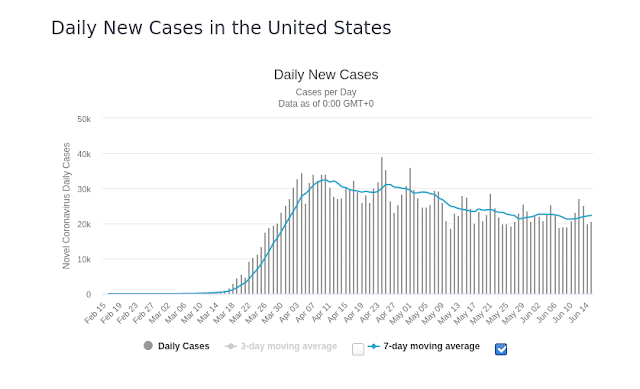 Iran
It's difficult to know exactly what went wrong in Iran, but religious gatherings in large numbers was a problem, and so was the sight of people kissing shrines, and thereby passing on the infection.
But the main problem in Iran, is that after doing well in reducing infections during April, something went wrong, and numbers have climbed alarmingly. Lack of free media in Iran means that we don't know what the blunder was. 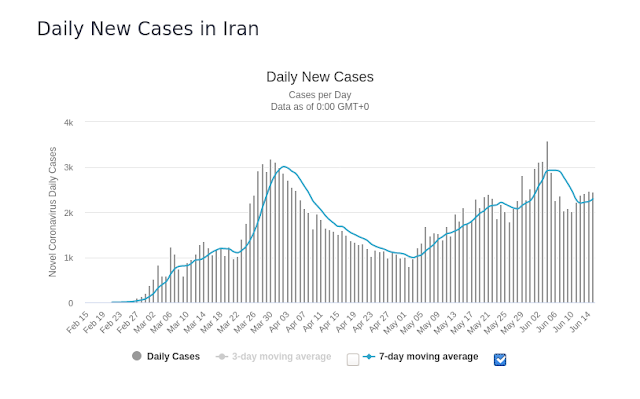 Brazil
Brazil is the worst country so far.  The president has taken the line "It's just flu" and "We can't do anything about it", has refused to mask, has claimed Hydroxychloroquine is a cure, and has generally been behaving like a tinpot politician in a third world country.
As a result, infection numbers have been climbing like a rocket, death numbers are even worse than the UK and there's no end in sight. Maybe the little wiggle in the numbers n the last few days gives some grounds for optimism. 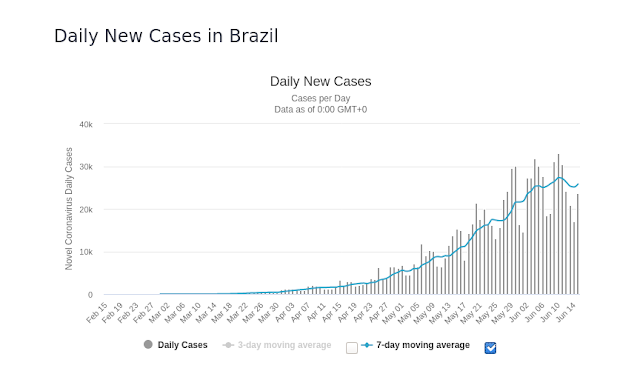 Italy
Just to show you how it can go, let's look at Italy. Italy was one of the first countries hit by the virus, after China and Iran, and it was always difficult to know what's really going on in Iran and China, the countries with a controlled press.
But in Italy, we knew. We watched the videos of exhausted tearful healthcare workers, begging. And they weren't begging for help, they knew there wouldn't be any. They were begging us not to make the mistake of underestimating this virus, not to lock down late, not to let the healthcare system be swamped by dying people.
We watched the videos - and ignored them. We were told "There's a lot of elderly people in Italy", as if there isn't in other countries? We were told "Couldn't happen here" and then it did.
But Italy recovered, and this chart shows how well they did. From six thousand new cases per day in mid March, down to a few hundred per day, and still falling. From a peak of 919 deaths per day on March 27, to a few dozen per day now. 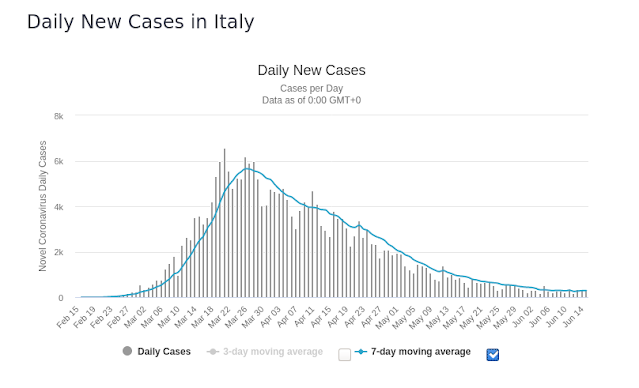 So. Bungles, blunders and butchery, but it is possible to beat this virus; in Italy, Spain, France and Germany, we see tragedy and then triumph. It can be done. But not if the blunders continue.
Posted by drsolly at 18:07