I learned a new word today - proning. It comes from the word "prone", meaning, lying on your front. The opposite is supine, lying on your back.
Proning is a medical term. You breathe more easily lying on your front than on your back, because of the positioning of your lungs. So, if someone is having trouble breathing, you prone them. It's useful to know that, because in my ignorance, I thought it would be the other way round. So now I know.
There's been a reversal of policy; children won't be going back to school, except for the ones already doing so. Instead, they're off till September.
Michael Whitty has been sentenced to three years in prison for arson. The thought he was burning down a 5G phone mast - actually it was 4G. Do your research.
There's a conspiracy theory going around, that says that Covid-19 isn't a virus, it's a reaction to 5G phone radiation. But 5D frequencies are much lower than the light we all enjoy from the sun, and the amplitude is tiny. Of course, "Do your research" doesn't include "spend three years studying physics" and usually means "watch youtube videos made by ignorant idiots".
Sometimes I think that people should be required to pass a gullibility test before being allowed on the internet. I recently saw a woman being charmed (the word commonly used is "groomed") over the internet, and she was convinced that the charmer was going to marry her (she in New Zealand, he in Nigeria). It was only when someone noticed that the charmer had publicly announced his marriage two months ago and pointed this out to her, that she realised that he might not be entirely honest.
These 5G idiots are mostly in the UK; we've had three times as many attacks here as in the rest of the world combined. Why is this? All over Europe there must be villages wondering where their idiots went.
But maybe the USA will catch up, as soon as they've finished protesting about the Covid-19 lock down and police murders. There's a fertile soil of people eager to believe anything that someone tells them. Most of them are signed up to the God theory, and half of them voted for Trump. They'll believe anything.
I expect mast burnings to be the new black. 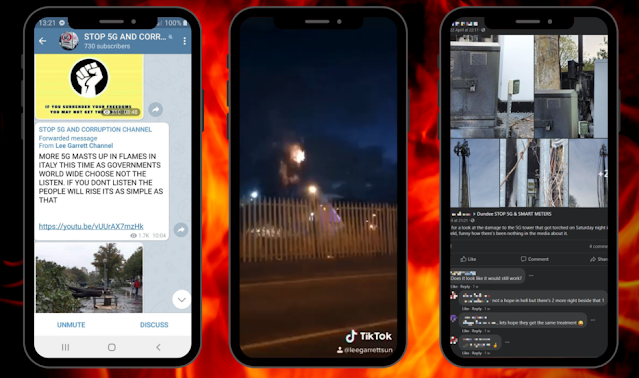