The Waitrose van, bearing gifts.
Another week, another delivery.  I sprayed with alcohol, Ladysolly put it away in the fridge. It's all routine now.
But we don't get to choose the expiry date of purchases, and since this delivery has to last a week, menus need to be planned very carefully. Ladysolly is an expert at that.
There have been black lives matter protests all over the country. It's hard to comment. They are right to protest, and have the right to protest, but the virus loves a gathering of crowds. 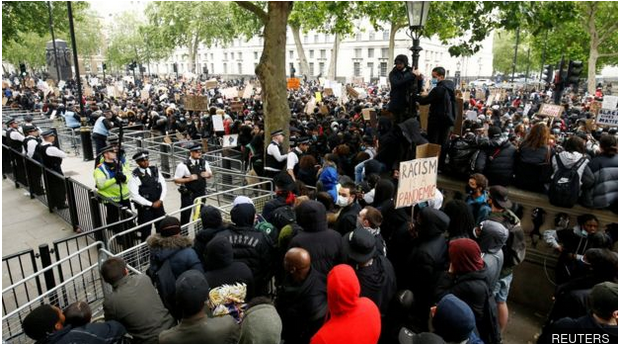 We'll see an upsurge of infections in a couple of weeks, but only partly because of this. The main reason will be the premature easing of the lock down, but who will be able to say what the cause was? And to add to the agony, darker skinned people are hit disproportionately hard by Covid-19.
It's like the economic downturn that Brexit made inevitable. Now, that will be entirely blamed on the virus - and the effect of the virus was several times as great as the effect of Brexit.
The USA has asked us to send Prince Andrew to them for questioning, on the Jeffrey Epstein case. He did say that he would, but now he's being asked. If he does go to America, he could be subpoenaed and made to appear in court. We should at least get an assurance that he won't be knelt on and asphyxiated by a rogue policeman, of which the USA has an ample supply.
Posted by drsolly at 00:16