It's a slow motion train wreck. We saw this coming a month ago. We saw the exponential rise in cases, and in deaths. Testing is currently at a level of 3 per thousand (UK is 80 per thousand) so there are probably a lot more infected than we know about.

The same might be true of deaths. In the big cities of India, there are some very sophisticated healthcare professional, but in the countryside, in the villages? Someone dies, does anyone know what he died of?

All we have to go on, are the reported numbers. So let's look at those. We've seen the pattern of how this virus goes. It starts off with a rapidly increasing uptrend, an exponential growth. After a while, this reaches a plateau. The plateau is usually caused by a stringent lock down. If people stay apart from each other, the virus cannot spread. The third stage, is a decline, which is much slower than the initial growth. There can also be a fourth stage, a second upsurge (that's happening in Iran now).

What are the causes of these stages? We know that there is no vaccine, and we know (from testing samples of the population) that we are a long way from saturation, where a very large percentage of the population has been infected and is now immune. Right now, only a few percent of people have had the virus and are immune.

The initial exponential growth is because this virus has an R of 3 - each infected person will infect 3 other people. This continues until either most people are infected, or else some action is taken to reduce the R. Reducing the R doesn't happen all at once, it takes effect rather slowly, so the curve stops climbing so fast, and then levels off. When the curve is level, the R is 1; each infected person infects one more person.

So what reduces the R? Separating people. You ask people to stay at least two meters apart, to wear face cloths, and to hand sanitise. If everyone does that, R immediately falls to zero. But not everyone can do that, because some people are in essential jobs.

And there are always arseholes, who haven't understood why this is important, and try to behave as usual. So R doesn't come down to zero.

It's as simple as that.

As you can see from the charts, India is in the first stage, exponential growth. When will it plateau? We don't know. India is, we're told, already on lock down, but from these charts, and from pictures we've seen, they aren't taking it seriously.

I feel as if I'm watching a train wreck in slow motion. 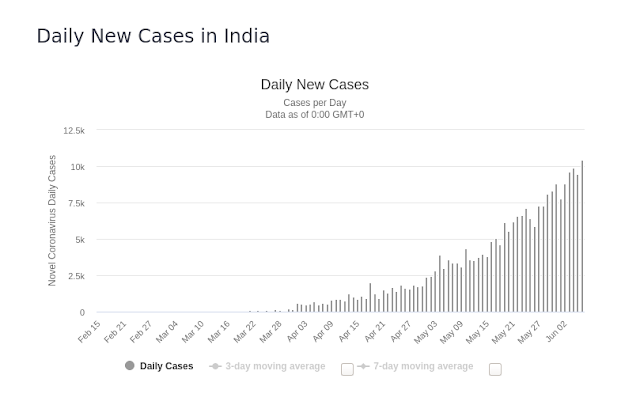 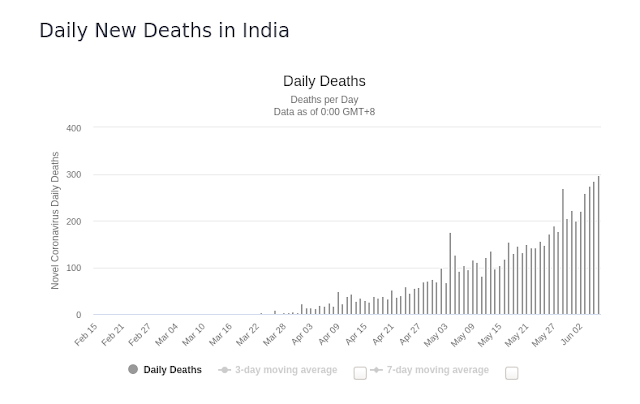