We aren't doing very well, are we?
We locked down later than we should have. As a result, we now have the second highest deaths per million from the virus (Belgium being the first, and not counting tiny countries like San Marino). We have the second highest death total (the USA, with several times more people, being the first). And the true number of deaths is at least 50% more than the reported number.
And when you look at excess deaths (how many more people died than you'd expect at this time of year), the UK is second to Spain in excess deaths per million, second to the USA in total excess deaths. Not that we would want to be first in any of those categories. 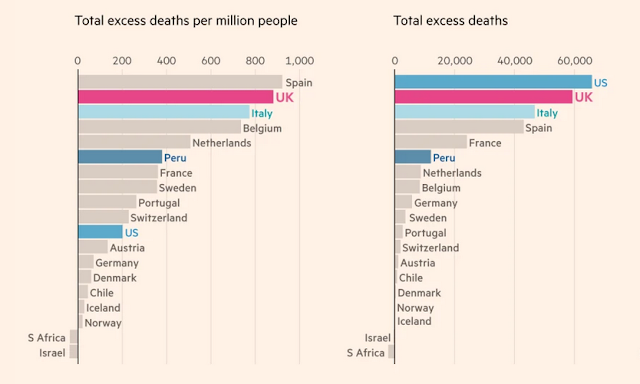 We completely bungled on testing to start with - we bought millions of the Wrong Sort of Test. We bungled on PPE, having inadequate supplies (we still do).
And now? We've bungled on the testing some more - we're counting tests sent out as if they were tests actually done, and we're counting a test of the throat and of the nose, as two tests. And I still don't know how accurate these tests are. Or how soon they turn around.
We've bungled on the tracing app. It was supposed to be rolled out on June 1; now we hear maybe the end of June, so for the whole of June, it won't even be available to install. We bungled on the security of tracing - there's no way to discover whether the call you just had from "Karen at tracing" really is official, or just another scammer. Except we're told that the official phone calls will "sound professional".
We are now bungling on our inability to know the reason for the disproportionate death rate of darker skinned people - if the issue really is vitamin D, then it would be so easy to rectify.
We have bungled by not making mask-wearing in public places as compulsory as possible. Unmasked people in public should be called out with "Put your mask on", the same way that during WW2 the cry was "Put that light out". Masking is cheap, simple and effective, but it's best of everyone does it. That's what happens in other countries - why not here?
... later ... our government has announced that people using public transport will be required to wear face masks from June 15th. Why not from Monday the 8th, now that they've woken up to the idea that everyone else already knew about? Maybe they only just now read my "Masked Hamsters" blog?
Worst of all, we are bungling on easing the lock down too early. The number of infections is not down as much as it should be, the death rate is still hundreds per day, the track and tracing isn't available (except by asking people to remember and telepathically know the names of the people they've been close to in the bus). Obviously, we'll all recite a list of our least favourite politicians, but seriously? You were on the underground with dozens of others. And you really have no idea who they were.
Today is the 80th anniversary of another British defeat - the end of the evacuation at Dunkirk. And let's be real - it was a defeat. We scuttled out of the continent with our tail held low. Dunkirk was the result of British blunders going back over the previous ten years.
Between 10 May and 22 June 1940, 3500 British soldiers were killed in France. The number of British pandemic deaths between 10 May and 22 June 2020, is going to be several times as many.
Posted by drsolly at 18:12