Day 104 of self-isolation - What is going on in Texas?

What is going on in Texas? 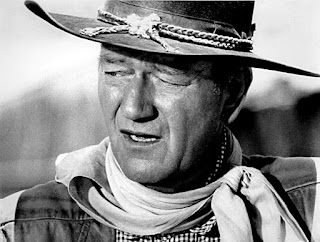 The most obvious answer is, a pandemic of Covid-19, as you can see from the graph. 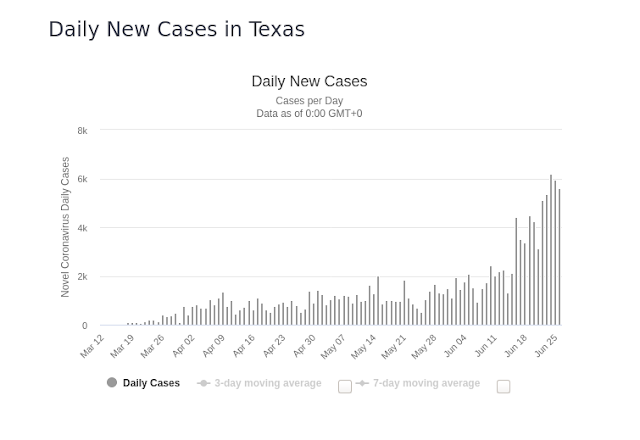 Now some details.
Yesterday was the 15th day of record hospitalisations in Texas; there's 4000 Texans in hospital with Covid-19. The Texas Medical Center’s intensive care capacity is at 100%. Texas is not far from the point at which the healthcare system is swamped. The current unused capacity in Texas, is 12,600 beds and 1,300 ICU beds.
The medical director of critical care medicine at the Houston Methodist hospital system, said they were managing for now, “but if this trajectory is what it was the last 10 days when we literally had a tripling of our cases — we can’t do that for a couple weeks at all.”
Healthcare authorities are thinking about temporary hospitals. At the Austin Convention Center (starting from mid-July), at tents, stadiums and hotels.
Meanwhile, the Covid-19 USA boss Pence is claiming "remarkable progress" - well, that's true from the point of view of the virus, which has progressed from 20k new cases per day, to 40k. And just to pour gasoline on the fire, Pence pointed out that the constitution guarantees freedom of speech and assembly, and it would be illegal to ban large gatherings of people. Nobody would wish him to become a victim of the virus, and nobody would claim that he is in the pay of the virus, but it would be nice if he masked himself.
Texas Governor Greg Abbott has hit "pause" on the reopening of business. "This temporary pause will help our state corral the spread". John Wayne rides again. Elective surgery is cancelled in Bexar, Dallas, Harris and Travis counties — home to the cities of San Antonio, Dallas, Houston and Austin.
Abbott has banned local jurisdictions from making masks compulsory. I'm getting tired of the story of different levels of US government giving contradictory orders. The CDC says "mask", the president says "not me". The state governor says "not compulsory", town mayors say "must mask." Harris County says "mask or be fined $1000". Judge Hidalgo says "mask or be fined", Lt. Gov Patrick said "that's government overreach". It really makes me want to bang heads together. No wonder Americans don't know what to do. They aren't just getting mixed messages, they're getting government officials contradicting each other.
Abbott said "I urge all Texans to do their part to help contain the spread by washing their hands regularly, wearing a mask, and practicing social distancing."  Greg - make it compulsory. Take this seriously.
For me, this is very simple, it's a health and safety thing. Restaurants don't have the freedom to have rat-infested kitchens, people don't have the freedom to drive while drunk. Why? Because doing so can injure other people, just like not wearing a mask can lead to other people getting infected.
Every county in Texas, every town and maybe even every street seems to have different rules, and groups that are pro and anti the rules. There's a group called "Freedom to breathe" who claim that going unmasked is a human right, just like drink-driving.
This is springtime for Coronavirus.
A lot of the spread is in bars, so the governor has closed the bars. Restaurants have been told to go from 75% capacity to 50%.
And Texans travelling to New York will have to endure a two week quarantine. New York went through this ordeal once, they don't want to have to do it all again.
Information about Covid-19
Meanwhile some more information about the disease. There has been a study on the use of statins, which is a drug very commonly available and in use by 10% of the UK population. 1219 Covid-19 patients were given statins, and 5.2% of them died. But of the group not given statins, 9.4% died. Statins are already well tested and rarely have negative side effects, and they are an effective suppressant of inflammation. They cost about £0.03 per dose.
On the transmission of the disease - a study has shown that 40% of transmissions are from pre-symptomatic people. So they don't know they are infected, but can spread the virus. That's why we should all mask.
If you do get infected, most people will recover (or not even know that they are infected). But if you get it badly, you will (on average) be in hospital a week after the first symptoms, and if you get it really badly, the average time to death is two weeks after symptoms.
Posted by drsolly at 01:24