As soon as the Florida governor DeSantis announced "Beaches open" several weeks ago, I added Florida to the states I was tracking.

Today, Florida had 8942 new cases. Miami is now requiring masks, with a $500 fine for non-compliance (check your local laws, things are changing rapidly). But has the governor mandated masks statewide?  No. Has he rolled back the reopening? No. He's going to leave it to the next level of government down - sound familiar?

Look at the graph for Florida. It is scary.

No-one wants to grasp the nettle. And when you delegate these decisions all the way down to individuals, people will make a decision based on their own needs, not on the needs of the community.

And at a time when Americans need health care more than ever, and so many Americans are unemployed and have no job coverage, is it really the right thing to do, to strike down the Affordable Care Act? And when there are a ton of people with long-term damage from Covid-19, is it right to pull away pre-existing coverage?

Dr Falci says "Something is not working". He's right. You need to see who is infected, and isolate people who are infected. You need to mask, mask, mask. Masking is not a political statement, it's an IQ test.

I get that people need to get back to work. I really get that. I understand why Americans want the economy to get back. But I don't understand why people can't mask on the street, mask in buses, mask on metros, mask in the workplace. It's a nobrainer.

It's not about freedom. Healthcare workers mask - why? Because they wouldn't be safe if they didn't (and even with masking they aren't 100% safe). Seatbelts are compulsory. You aren't allowed to drink and drive. Don't talk about freedom - you already gave up your freedom to drive your car over the speed limit. And please don't try to argue "If you want to stay safe from people driving cars too fast, stay home".

And looking at the big picture - Brasil is still the country suffering the most, with 1055 deaths er day and 47,000 new cases per day. But America is at the same level in new cases at 47,000. Some good news (by which I mean not as bad as historically) deaths are 642. But the upturn in new cases (which started in mid-June) is likely to be followed by an upturn in deaths per day, a couple of weeks from now.

The weather in England is great - hot and sunny. But that means big crowds, cheek by jowl on the beaches. We might suffer for this a few weeks down the line. The only hope is that the virus is less infectious outside than indoors.

South of the Rio Grande is still looking dreadful, in pretty much every country there. Brasil and Mexico are now the top two countries for death numbers.

But India, Pakistan and Bangladesh are climbing fast, and I predict that at some point, maybe a few weeks down the line, they will become plague-pits. 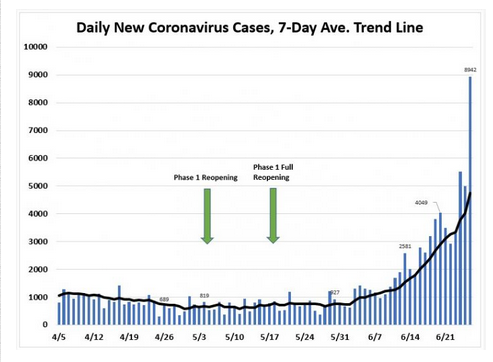