Day 74 of self-isolation - Hydroxychrloroquine - the roots of the myth

Hydroxychrloroquine - the roots of the myth


Towards the end of March, Trump got enthusiastic about chloroquine (he said, "some people call it hydroxychrloroquine" because, he didn't realise that these are two different things) and the world went mad, chasing the rabbit that Trump tossed out. And people have been arguing about it ever since.

A week ago, Trump doubled down by announcing that he himself was taking HCQ. As a preventative.

Now "The Lancet", one of the most respected medical journals in the world, has published a major study that shows that HCQ is harmful to Covid-19 patients (although still a valuable drug for lupus and some other conditions).

And so Trump has stopped taking HCQ. I would guess that the White House medical team, after reading that report, cut off his supply. If I were his doctor, and had read that article, I would certainly have done the same. Trump doesn't even have Covid-19, so why risk taking a drug that can give heart problems, especially in a person that is so obese?

So I wondered where this rabbit had come from? Where did this story start?

I think I found the origin. It's a letter in "Nature" (a very highly respected scientific journal). The letter, dated 18 March 2020, was written by Jia Liu, Ruiyuan Cao, Mingyue Xu, Xi Wang, Huanyu Zhang, Hengrui Hu, Yufeng Li, Zhihong Hu, Wu Zhong and Manli Wang (the affiliations list shows, unsurprisingly, that they are all based in China) and is entitled "Hydroxychloroquine, a less toxic derivative of chloroquine, is effective in inhibiting SARS-CoV-2 infection in vitro"
https://www.nature.com/articles/s41421-020-0156-0
"In vitro" literally means "on glass". SARS-CoV-2 is the name for the virus that causes the disease Covid-19. It means that this isn't a test on actually living beings, just in a glass dish.

This would explain why Trump got confused between chloroquine and hydroxychloroquine.

So, a paper published on 16th March, read by Trump a few days later (or, more likely, it was summarised for him by his staff as a possibly promising drug worth investigating), was seized on by Trump as a game-chamger, in order to keep up the spirits of Americans who, by then, were dying in large numbers.

Another paper, published in "Nature" on February 4th, looks at the effect of Remdesivir and chloroquine, also in vitro, and by a similar list of authors, says much the same.

Remdesivir has, since then, become the most promising drug to offer treatment. One study found that it shortened the recovery time of patients from 15 to 11 days.


You will have noticed that Trump sticks rigidly to a policy of "Never admit mistakes". I suppose he thinks that admitting mistakes makes you look weak? And for sure, any admission of a mistake would be seized on by the media with great glee. So, having announced this "game changer", he can't say "Sorry, I was wrong". The most he can do, is stop taking it himself. 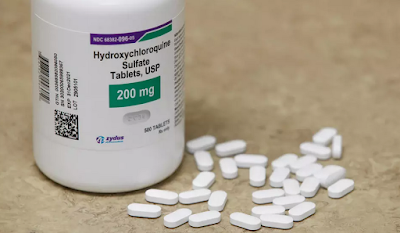