Rick Heidel alerted me to a source of death statistics for the USA that I hadn't spotted before. These are official USA deaths from all causes, week by week, reported by NCHS (National Center for Health Statistics). I've compared those with the Worldometer figures that I've been using (these are very similar to the John Hopkins University figures, qand I think any differences are minor).

I read the notes to the NCHS statistics, and they explain that for the last few weeks, the death figures are incomplete.

"Previous analyses of 2015\u20132016 provisional data completeness have found  that completeness is lower in the first few weeks following the date of  death (<25%), and then increases over time such that data are  generally at least 75% complete within 8 weeks of when the death  occurred"

This is clear if you look at the data for 5/9 and 5/16. The number of deaths per week was around 57-58 thousand before the pandemic. The figure of 22 thousand in 5/16 is because of this reporting lag (unless you think an effective troupe of faith healers has been busy). Likewise the figures for 5/9 and 5/2 are incomplete. The further back you go, the better is the completeness of the statistic. This is just because the statistics arrive late, and they always have (NCHS analysed 2015-2016).

In a normal week, there would be some 58,000 deaths. If the actual deaths in that week are 74,000, then we call the difference of 16,000 "excess deaths". The usual reason for watching "excess deaths" is to alert us to a problem that we hadn't realised was happening. For example, if a hospital has excess deaths of newborns, then maybe there's a problem in that hospital that needs attention. In this case, we know the cause, but we're cross-checking the Covid-19 numbers reported in other sources.

So, what information can we extract from these data by looking at the number of excess deaths?

By how much are the numbers being understated? That gets difficult, because of the lag in reporting deaths mentioned in the notes. As more deaths get reported for the last 8 weeks (the notes suggest that the data could be as poor as 75% complete for the last 8 weeks), the "excess deaths" figures could rise. But we don't know that. So we have to take these numbers with a pinch of salt.

But what these figures suggest, is that the Worldometer numbers are low by a factor of 30-40% or so.

I also include a study done in NYC, which I can recommend as worth reading, and which shows (among other interesting details) that the actual death numbers were 28% higher than the reported numbers.

In the spreadsheet, I give the sources of data I used.

We can't give an exact percentage by which reported Covid-19 deaths are understated, but it looks to be 30 or 40%. But we can say with a strong degree of confidence, that the numbers are not being overstated. 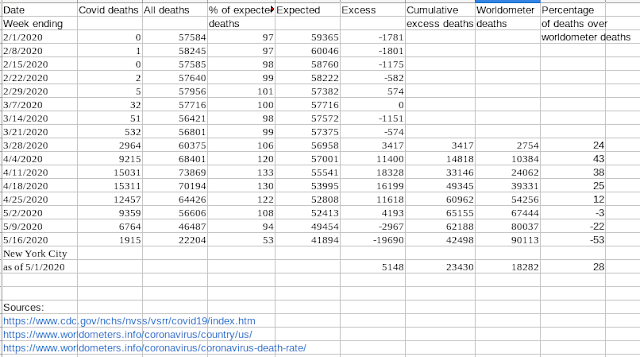