There have been 171 dead healthcare workers in the UK - so far. This puts us in the top slot in Europe, and possibly in the world.

In Italy, 108 - but Italy is a few weeks ahead of the UK in the progression of the virus, and has less population in total. Spain and the USA have a third as many (per million population).

But Sweden, Germany, Holland - none (or nearly none). Why is this?

Are German healthcare workers better able to see the virus and dodge? Is it because very few British healthcare workers can speak German, whereas all the German ones can? Does Covid-19 have respect for Germans and contempt for Brits?

It's more likely to be the lack of provision of personal protective equipment (PPE) such as masks, face shields, gloves and bodywear. This has been a UK national scandal since this pandemic began. And has it now, at last, been sorted?  I don't know, but I still remember the pictures of the nurses in Northwick Park Hospital that had to make their own PPE out of bin liners. 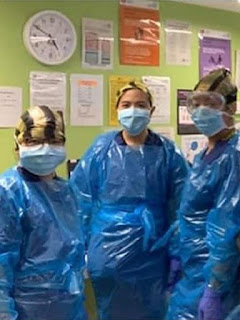 A round of applause each Thursday doesn't make up for the fact that these three nurses were later diagnosed with Covid-19.

But it wasn't just three nurses. About 2/3 of UK doctors still feel only partly, or not at all, protected in the course of their work. Can you imagine going to work each day, knowing the risks that you are running?

When this situation is over, we need to take a good hard look at the way the NHS is funded, organised, staffed and prepared for emergencies. The loss of NHS staff due to Brexit has to be made up by offering considerably better pay and conditions - and also by recategorising more healthcare workers as "skilled" so that we can, in future, continue to recruit abroad. But the vast majority of our healthcare workers should be locally sourced, and if that means offering free tuition for doctors and nurses, then that's part of the price we have to pay for Brexit.