The generator arrived today. What a mess! It was described on eBay as "new, box dirty". But the generator was badly corroded, and I'd be reluctant to start it. 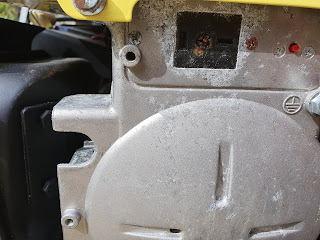 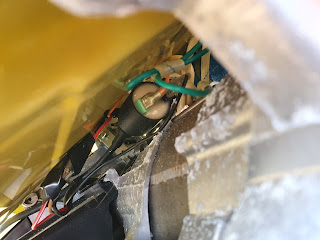 I've asked the seller to give me a full refund. So I ordered another generator, this time from Amazon. It's another two-stroke petrol, £128 for a 750 watt output.

My electric toothbrush is corroded. I actually have two, one for the main brush and one for the small interdental. Having two means I don't have to keep changing the brush head. The corrosion is on the metal shaft from the motor that drives the brush head. So I took it into my workshop and filed off the corrosion, Dremelled it with a wire brush and now it looks pretty new. I smeared Vaseline over the metal, and hopefully that will sort it. But just in case it doesn't, I ordered a new one from eBay - they're only £7. It's battery operated, because I don't like the ones with a built-in rechargable battery; when that battery no longer holds charge, there's no way to replace it.

I've given up on trying to straighten my little finger. I showed it to the doctor two months ago - the tip droops at an angle of 20 degrees. This is called "mallet finger" and it's a mild case, the finger still works fine. My idea was that I'd splint it for a while, and it would straighten itself. The doctor said that it was worth trying, but was unlikely to work, and I should give up if six weeks gave no result. Do you remember those days, when you could see the doctor about something as trivial as that? So, the treatment didn't work, it's eight weeks later, so I'm giving up.

In the UK, we've taken a big building and converted it into a 4000 bed hospital, entirely for Covid-19 patients, and we did it in nine days. Well done the people who did that!