Looking to the future with C-19


I am not a medical doctor. These are my opinions, based on watching what has been happening, on internet research of numbers and infection mechanisms, and on a model based on the standard epidemiological differential equations (available if you want a copy).

Most people are infectable by this virus; I'm guessing that 40 to 80% of people will be infected; this is what most medical people are saying.

Those who avoid infection, will be those who are best able to stay away from other people, which is going to be VERY difficult, see below. Hand hygiene will help.

The number of known-infected people has been rising by about 30% per day in countries that have started along this road.

In the UK, there are 798 known cases and 10 deaths. In general, the fatality rate is 2 or 3%, mostly with people who have preconditions, or are elderly.

I ran the epidemiological equations, and it looks like the infections ate will peak in something like two months (plus or minus a month).

Most people, if they get infected, will experience mild symptoms (or none). Some will feel quite ill, like a bad dose of flu. Some will be hit so hard that they will need hospitalisation because of breathing difficulties.

The health services of each country will be swamped at the peak infection numbers; most people needing hospital, won't be able to get help. No country has the level of medical facilities to deal with this. So, fatality rates will increase during the peak. I don't know how much; my guess is quite a lot.

So, if you already have a breathing issue, you are most at risk. behave accordingly.

What can you do if you're a vulnerable person? Avoid other people as much as you can. Don;t go out if you can avoid it. Hand sanitise (soap and water). Find out how to do that.
Expect this to last months, not days or weeks. Even after the peak (in 2-4 months), there will be a large number of cases. So expect to hunker down for several months.


I did some maths, using the SIR model by Kernack and McKendrick (google it if interested). I am not medically trained; but I can do some maths.

Total population is 60 million (UK). Scale it for your numbers.

All are susceptible at the start

People are taking the same precautions in future, as they are now (in terms of isolation, hand washing etc).

Everyone is equally probable to get infected.

There is no vaccination available

The numbers along the bottom are days from today

So I get the peak in 2 or three months, then tailing off. At the peak, about half the population is infected.

This says nothing about the fatality rate, which I understand is worse among the elderly, and those with prior conditions.

But it is clear that at some point, the health services will be overwhelmed and unable to cope, and that will mean less availability of intensive care beds, and therefore a higher fatality rate.

Conclusion - try not to get infected during the peak period - even better, not at all. Eventually a vaccination will be available (and my guess is that the normal testing will be shortened, because the risk of an insufficiently tested vaccine will be estimated as less than the risk of not using it during that peak).

This is a graph of the epidemiological model. 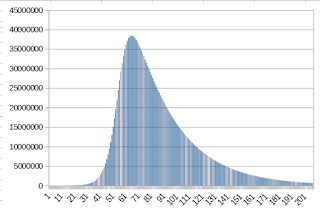 My next post will be about the economic consequences.