So said Mr Abdullah A. S. Patel, an Imam from Bristol, when he questioned the Tory leadership candidates.

The candidates eagerly agreed, and promised to investigate Muslim-hatred in the Tory party.

But words do indeed have consequences. Here's some words from Mr Patel, advice for women. 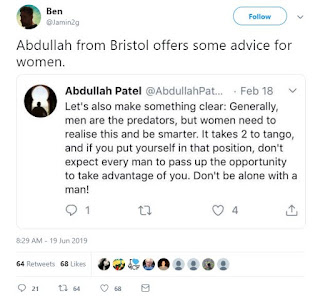 Here's Mr Patel's proposal for Israel - this is the same graphic that Naz Shah, the Labour MP shared, and which she subsequently apologised for as antisemitic. 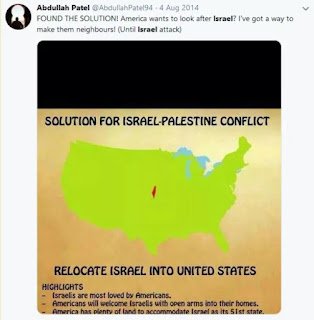 In other tweets, he claims that British politicians are 'on the Zionists Payroll’. That "Zionists are "hiding behind the Holocaust".

But, as Mr Patel explained - words have consequences. Mr Patel has now been suspended from the school that he is deputy head of.

Yes. Words have consequences. And if you live in a glass house, don't throw stones.