The acorn doesn't fall far from the tree.

Sir Oswald Moseley was the blackshirted scroat whi led the British Union of Fascists (usually known as the Black Shirts) until just before war broke out with Germany in 1939, whereupon he was confined to quarters until we'd dealt with his much-admired chum Herr Hitler. 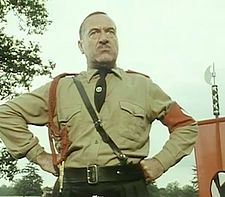 who usually got his come-uppance from Wooster and Jeeves well before the last chapter of the book. Recommended.

After the Battle of Cable Steet in 1936, when Moseley's Blackshirts were unable to intimidate the East Enders, his influence waned, reaching its nadir when WW2 started

Oswald Mosely had a son, Max. Young Max was involved in politics when he was a teenager, and the acorn doesn't fall far from the tree. 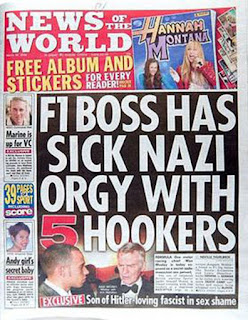 No longer a callow youth, Max turns out to have an interesting taste when it comes to his fun.

So he sued the News of the World in privacy grounds. After all, if someone wants to dress up as a Nazi and do sexy sado/masochistic things in private, that's not anyone else's business.

Max won the case. His private proclivities were, the judge said, not a matter of public interest.

But in the course of that case, reference was made to an unpleasant-sounding leaflet, with racist content, used in a political campaign that he was involved in, and signed off by him. Unfortunately, no-one had a copy of the leaflet, so his denial was accepted.

Now the leaflet, which says it was "published by Max Mosley" has surfaced. It includes ""Protect your health. There is no medical check on immigration. Tuberculosis, VD [venereal (sexually transmitted) disease] and other terrible diseases like leprosy are on the increase. Coloured immigration threatens your children's health."

He's in a bit of a pickle. Did he commit perjury? I don't know, but the penalty is seven years if he did. Here's Max being interviewed by Channel Four News.

The acorn doesn't fall far from the tree.