As happens on nearly every day, a fresh crop of malware arrived in my inbox. Nothing really special about this one - it's an XLS file, first seen by Virustotal two hours ago, not seen yet by most antivirus companies, and certainly they haven't had time to put out an update. Three copies of it have arrived, and I showed it to Virustotal. 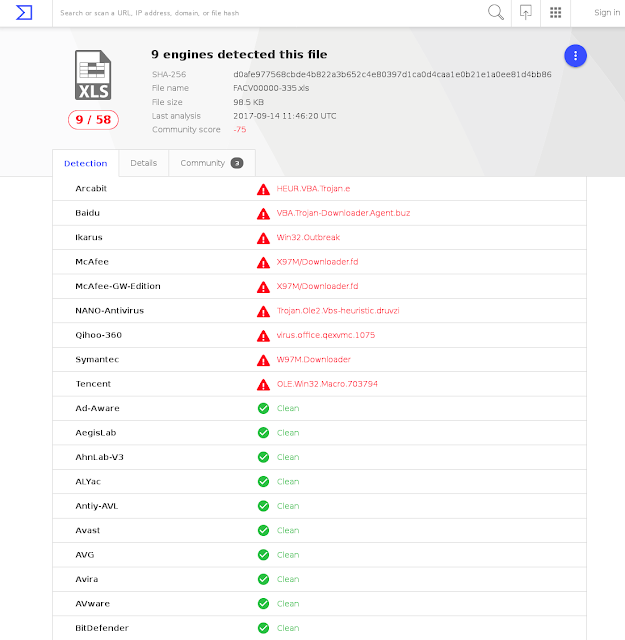 As usual, about 85% of products failed to flag it. You can see from the screen capture which ones did, but don't take that as meaning that those are exceptionally good; the next time I do this, some different products will flag, the rest will pass as clean.

What this means is - all that stands between you and malware invading your computer, is your own scepticism about incoming email. If you're running an antivirus, that might make you feel better, but praying is almost as effective. And I don't know the name of the God of computers. The mighty Turing, perhaps?

If you're responsible for a bunch of users, this is why you're getting hit by malware. Users don't care about security, never have, never will.  And I can prove that to you. Go round the M25 for a while, and notice all the people using their mobile phones, some talking and some texting. Look at all the people who are driving so close to the car in front that if the car in front does an emergency stop, or gets a puncture, they won't stand a chance of avoiding a collision. If people are that careless about their personal safety, despite many attempts at education, why would they care about computer security?

So they won't be sceptical enough. And they know they're protected by whatever wonderful product you installed, and they'll click on things that ought not to be clicked on, and next thing you know, you have a mess.