Spiders are a problem. All those legs make them a bit creepy, but that isn't their fault. They eat flies, and that's got to be good. But we don't like them creeping around the house.

So I don't want to kill any intruding spider; I'd rather just tell it to leave. But they don't listen, and I don't like the thought of picking one up, because I'd probably damage it with my fingers, plus ewwwww, spiders.

So 25 years ago, my daughters made me a spider box. It looks like this. 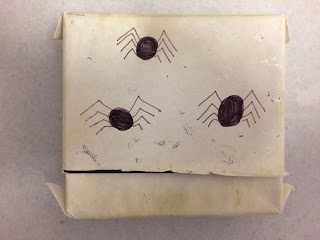 It was made from a box that previously contained 5 1/4 inch floppy disks. You can see it's been nicely decorated with pictures of spiders, and glitter. Here's how it works. 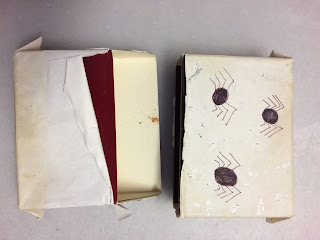 You use the part decorated with spiders, to encourage the spider into the other part, and when it's safely inside, you close the box, trapping the spider inside. Then you open a window, hold the box outside, open it and shake the spider out. Result - spider-free house, undamaged spider.

I used it again last night, on a creature that is three inches across. It still works. Thanks, daughters!