Kevin Myers has previous form on this area, having written a Holocaust denial piece saying "There was no holocaust (or Holocaust, as my computer software insists) and six million Jews were not murdered by the Third Reich. These two statements of mine are irrefutable truths." 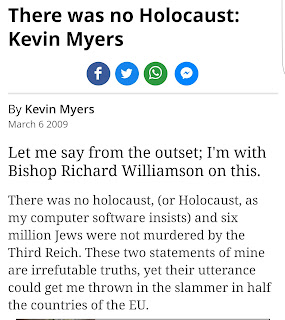 So in the Irish edition of the Sunday Times (and on the web site of the mainstream Sunday Times (ST)), Kevin Myers, recently said "Jews are not generally noted for their insistence on selling their talent for the lowest possible price". 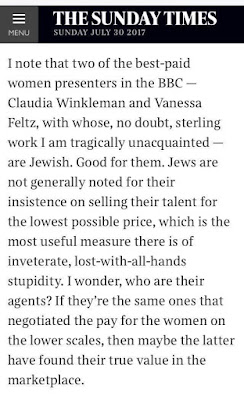 This was written by Myers, but presumably it was read by an editor, or sub-editor, or legal team, before publication. If a newspaper doesn't get anyone to check what it's printing, it could find itself repeated sued for libel.

Frank Fitzgibbon, editor of the Sunday Times Ireland (STI) has said that he took "full responsibility". Myers, we're told, will not write again for STI (he had a weekly column, for which he was paid). Well, that's good, but that's not actually taking full responsibility, that's taking partial responsibility. If you were fully responsible, you would also be fired. Still we mustn't expect newspaper editors to have a full command of the English language.

I expect antisemitism in the far left and the labour party, on account of their confusion and conflation between "Jews" and "the government of Israel". I expect antisemitism from organisations with names like "Britain Now" (I'm British) or "White Power" (I'm as white as they are). But I don't expect it from respectable newspapers like the Sunday Times.

So that's another newspaper that we won't be buying. And I've made a formal complaint to IPSO. If you want to complain to IPSO, go here.
Posted by drsolly at 16:31