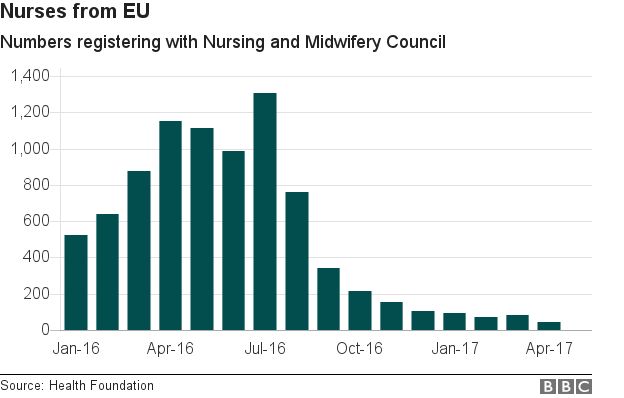 If you lived in the EU, would you want to go work in the UK now? Not knowing what your future status might be?

Our future in the UK has been buggered up by, mostly, two people. Cameron, in order to fend off a split in the Conservative party, agreed to an unnecessary referendum, without specifying a minimum vote and without spelling out just what Brexit meant. He was followed by May, who called an unnecessary election and fought a lacklustre campaign to wind up without a clear majority. May also doesn't say what she's aiming for in Brexit, other than "Brexit means Brexit". And just to put jam on it, she's inviting the DUP (anti-abortion, anti-gay and anti-evolution) into the dinner party, thereby putting at risk the Northern Ireland peace process, because Westminster should not be taking sides in the negotiations between the two sides in Northern Ireland.

Other villains - Ed Milliband for A) displacing his brother David and B) introducing the change in Labour party rules that has solidified the Labour lurch to the far left.

Nigel Farage, the ex-stockbroker who poses outside pubs with a fag and a pint pretending to be a man-of-the-people, and who led the pressure for Brexit.

Boris Johnson, who led the lying in the pro-Brexit campaign.

Ladysolly today suggested that it might be time to start to think about lifeboats.

We're both not much under seventy, so we won't be looking for jobs. We both speak a little French, a bit less German and (in my case) tiny Latin. So we really want to live in an English-speaking country. So let's look at the possibilities.

The USA, obviously, is ruled out, and not just because of Trump. It's also the gun laws (which cause the massive gun casualties even though Americans can't understand what could possibly be leading to all these people getting shot), the lack of universal healthcare and the general plonkwittery of the Republican party who seem to be a bit like the DUP only with less Orange (namely, Trump). The other lot aren't much better).

Canada looks nice, but it's a long way away, and winter lasts 11 months.

South Africa? Out of the frying pan and into the fire.

Australia and New Zealand look good, but they are *very* far away from here.

I suggested Scotland, but independence looks unlikely after the latest election, even if another (unlikely) referendum were called. In which case, Scotland shares the fate of the rest of the UK post-Brexit.

Brexit. The most unnecessary stupidity we've done since Suez, and it's still going to happen. Maybe hard, maybe soft, whatever either of those mean, and if you think that the other 27 EU members are going to let us have our cake and eat it, then you're a raving optimist. The terms and conditions for Brexit will be dictated by Brussels. May (who has demonstrated her weakness and wobbliness) will swallow whatever they spurt out and tell voters that she's successfully negotiated a brilliant deal.

They speak English, the climate is the same as here (perhaps a bit more rain), they're in the EU, they have an NHS (the Health Service Executive). It's a democracy with proportional representation (hurrah). I don't like the religious leaning, but they recently approved gay marriage, so things are looking better now.