Yesterday, a Ten Commandments monument was emplaced at the Arkansas Capitol. This was contentious - here's why.

The first amendment to the US constitution says "Congress shall make no law respecting an establishment of religion, or prohibiting the free exercise thereof". This is the basis for the "separation of church and state" that many Americans believe in passionately. On the other hand, followers of some religions think that their religion should be embedded in the legal system.

So you can see why placing a symbol of one particular religion (in this case, the Jewish religion, because they were given to Moses to guide the Jews) might arouse controversy. Oddly, the monument to the Ten Commandments was not put in place by a consortium of Jews; instead (I'll explain why in a moment) it was put in place by public subscription, and heavily funded and endorsed by Christians.

This is odd, because Christians don't generally abide by the laws in the Old Testament. They eat pork and shellfish, tattoos, shave their beards, wear clothes of mixed fibers and don't honour the Sabbath day, ignoring that in favour of the following day which they call "The Lord's day".

Christians seem to think that a monument to the Ten Commandments, is a Christian symbol, and I don't think many people have pointed out that it isn't. Oh well. No-one said that religions have to be self-consistent.

As an aside - why the Ten Commandments? Well, you may remember the movie starring Charlton Heston. Just before then, the Fraternal Order of Eagles bought 4000 stones depicting the Ten Commandments, and scattered them around the USA. The movie promoters saw this as a great way to promote the movie, and the rest is history.

So anyway. From time to time, some pious bunch of Christians think that it would be a great idea to put this Jewish symbol on some piece of public property. And this causes a ruckus. Because a private individual can put whatever religious symbol they like on their own land, but the state cannot favour any one religion, because of the First Amendment. Usually, the Freedom from Religion Foundation points out the error, and (sometimes after a lawsuit that the religious cannot win (see First Amendment)) it is taken down. Or else, some group wins the right to put up their symbol next to it, which can be even more hilarious, as when the Satanic Temple gets the right to put up their statue to Baphomet, or gets the right to distribute the "Satanic Children's BIG BOOK of Activities" (which, despite the alarming title, is entirely innocuous) in places where the bible is being distributed.

When I heard about this, my first thought was, who would do such a thing? I can't believe that an atheist would break the law in this way; we have a good moral compass. And moslems in America mostly keep their heads down and believe in "live and let live". So who would take down the Ten Commandments?

It turns out, a Christian. And he's done it before. This time, he rammed it with his car, and it was shattered into pieces. Here's what it looked like before. 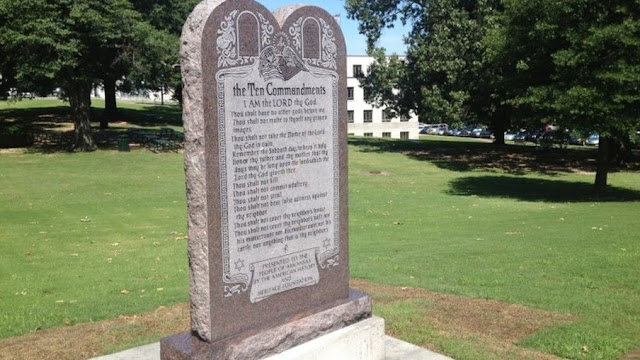 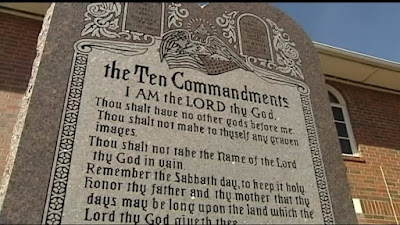 Notice the second commandment, "Thou shalt not make to thyself any graven images."

And then look at the engraving above it ... yes, you noticed? A graven image. It's an eagle. This stone breaks the second commandment.

I don't suppose anyone cares - after all the people who put it up, don't think that Old Testament laws apply to them. Except when they find one that they like, of course.

Michael Tate Reed faces charges of defacing an object or public respect.  He took video as he did it. On Facebook, he said that he did it because of freedom.

"This is Michael Reed, and I'm a firm believer that salvation is that we not only have faith in Jesus Christ but that we obey the commands of God..."

"But one thing I do not support is the violation of our Constitutional right to have the freedom that's guarantees us separation of church and state because no one religion should the government represent. So ... back at it again... so if you're in support of this, you can talk about it using the hashtag checkmate, and also I'm using my own car that I paid for." 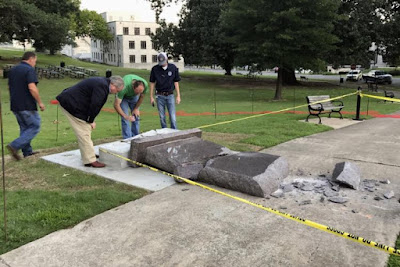 So it looks like this was done by a Christian, in support of the First Amendment.