The batteries in our phones, GPSes and other electronics, are never enough. And rechargables don't last for ever; the typical life of a rechargable is a few years. After that, there's a noticable loss of chargability; your gadget runs for only a few hours instead of several. And it goes downhill from there.

So I splashed out on an unbranded "Super power pack" from Ebay. It claimed some huge number of amp-hours, which I didn't take seriously. After some months of working, it failed. So, of course, I dismantled it.

It wasn't designed for taking apart, I had to slightly crack the shell. Inside, I found four unbranded 18650 batteries in parallel, and a small electronics circuit. I tested the batteries, and one of them had totally failed, and that meant that the whole thing didn't work. So I snipped out the failed battery, so now it has 3/4 of its intended capacity, but at least it works.

And I got to thinking. What if I used replacable batteries, and a good reliable brand, and made my own? It's really only the batteries that have to be good quality, the rest doesn't matter much.

Ebay is my friend.

I started off with one of these. It's a "5V 2A USB Mobile Phone Power Bank Charger Module PCB Board For 18650 Battery" and it cost me 99p, which seems to be the lowest cost thing you can get on Ebay.

Next, something to hold the 18650 battery. I bought this which gave me five holders for £1.07 (I might use the other four in some other project).

Then, a battery. I wanted good, strong reliable ones. I did some googling and came up with these, "LG Genuine Lion Batteries HG2 18650 3000MAh 20/30A IMR Rechargeable Batteries", four for about £5 each.

The cheapest 18650 battery I could find on Ebay was £1.59, and it claimed to be 9900 mAh which is probably about five times as much as it really is. Would you buy a battery from such a vendor?

I already had a charger, but you can get cheap ones for £0.99

My next purchase was optional, but I've found it extremely useful; it's a thing that displays the voltage and current draw from a USB port, "USB Charger Doctor Current Voltage Charging Detector Battery Voltmeter Ammeter", £1.75. You can get a slightly different one for £0.99 that uses the same display for voltage and current, showing them alternately. I prefer the double display for the extra £0.76.

Then I tested it. I connected the USB volt/ammeter, and my GPS, then pressed the little button on the PCB. A white LED started to flash, and the voltmeter showed 5.1 volts, 0.8 amps. And the charging display on my GPS showed that it was charging. Result!

So I had a look around Ebay, and you can get a 10,000 mAh pack for £7.59, which looks very nice, but there's always two questions - what quality batteries does it use (probably not the best) and can you replace the batteries after a few years (almost certainly no).

My device cost £7 for 2000 mAh ... but I carry a spare battery for it, which gives me 4000 mAh. I could carry more spare batteries if I wanted (and I always have a few extras in the car, because my head torch runs off the same batteries). And when the batteries get old, I can easily replace them.

Plus I have the satisfaction of making it myself. 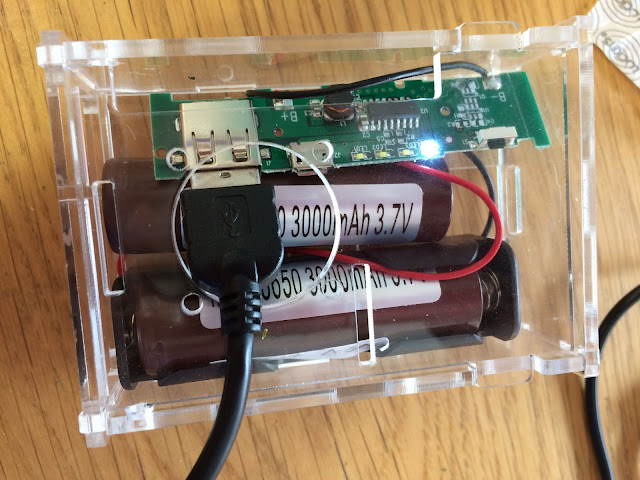