One important indicator of human health, is life expectancy. We all want to live longer, I think, and it's a measure that's easy to define and difficult to fudge. And this is still rising in western democracies; over 80 and counting. Except in the USA, where it's 79.

It is rising in the USA, but a lot more slowly than in the other countries. Why is this? I'm guessing it's because the USA is the only country that doesn't have a universal healthcare system.

I don't know how good these statistics presented below are; it's difficult to get good comparative statistics, and some people just make up their own facts. But if the figures below are true, that would help explain why so many people would rather live in Europe.

Why doesn't the USA have a universal healthcare system? It's hard to understand. The USA is a particularly religious country, so you'd expect that the people would want for the richer to help the poorer, the healthy to subsidise the sick. But it would seem that's not so.
US healthcare would seem to be expensive and ineffective.

Economic theory helps to explain this. In a country like the UK, healthcare comes from a single provider, who therefore has huge market power and is able to get good deals on drugs and services. In the USA, no one healthcare provider has any leverage with the drug companies or medical service providers, and that would tend to push up prices. In addition, because healthcare is usually via insurance, the insurance companies take a slice of revenue from the healthcare spend.

The Affordable Care Act (Obamacare) was a move in the right direction, but even that is now being reversed, and replaced by ... we don't know what, but I suspect healthcare is about to get a lot worse for the middle and working classes when the American Care Act (Trumpcare) gets passed. 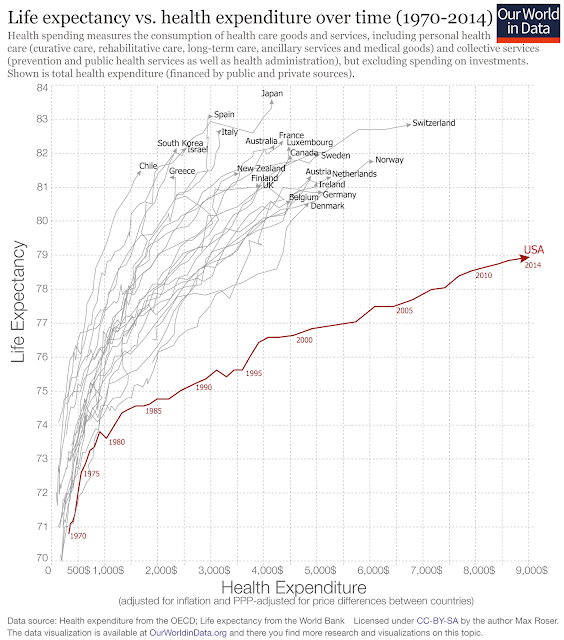