Yesterday, SimplyPaul and I went caching. First we visited Wheat Hold Walk; 12 caches plus a bonus in a wood. Many of these caches were difficult to find.

One of the caches was by a bridge; we spent a long time looking for it before giving up. Later at the event, I spoke to the cache owner, and we'd looked really hard in exactly the right place, so it wasn't there.

At one point in this series, we faced a steep downhill which, I assumed, would have a stream at the bottom. It didn't, it had a deeply muddy area. Then, on the other side of that, there was a steep upslope, about 30 degrees. Plus it was about 12 inches wide, with a couple of feet sheer wall restricting the 12 inch gap. Going up that on foot would have been really difficult - going up with a bicycle was nearly impossible. Push the bike a few inches, move the feet a few inches, repeat, repeat, repeat, repeat, slide backwards a foot, fall over onto the brambles ... eventually I got to the top.

After we finished those dozen caches, which took more than two hours, we got back to the cars for lunch. Then we drove to Baughurst Common, and whizzed around on the bikes to pick up a bunch more. One of the best was a cache very cunningly hidden in a way I've never seen before (and I've seen 46000 caches). Sadly, we found the hide but the cache wasn't there. At the event afterwards, I talked to the cache owner, and he confirmed that we'd found the hide.

Here's something we liked as we biked around. 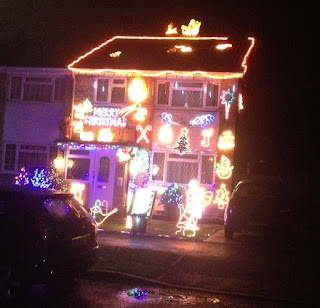 The top righthand window featured an animated Santa. The noticeboard at the front explained which charity it was supporting.

Then on to the event, which was the regular Cunning Cachers event run by the Teddies. It's a while since I've attended one of their events, and it was very good.
Posted by drsolly at 16:18