I don't think I've ever been to a Nativity before, although ladysolly thinks I must have. I have a poor memory, so maybe she's right, I don't remember.

I was invited to grandson.1's Nativity play. Naturally, I went.

We got up at 7am to get to London in time for the start. And because there's a major traffic obstruction at the junction leading to the nearest tube station, we had to go to Gerrards Cross train station to get into London, then a Taxi to St Michaels church. We arrived in good time, and joined the line of parents outside the church. For some reason (no room in the church?), they didn't allow us inside, so we all froze in the cold and blustery weather. 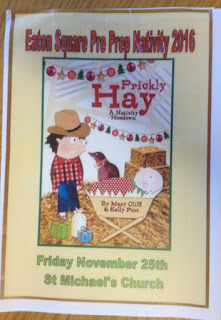 Ladysolly trotted off in search of coffee; I found a niche against a wall and tried not to think about my feet turning to ice. We'd arrived *far* too early.

Ladysolly came back with two large cups of hot coffee, which helped a little, then daughter.1 turned up, then daughter.2. Grandson.1 was inside the church, getting ready - he had a speaking part. 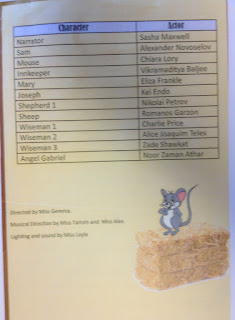 Ladysolly and I were huddling together for warmth, which helped a bit, and then they opened the church doors and we all went in; it was nicely warm inside. And impressive. 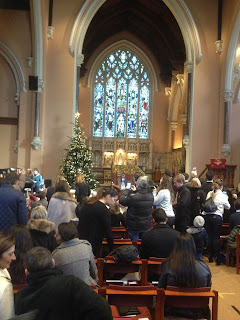 It's a huge building, with stained glass windows ... 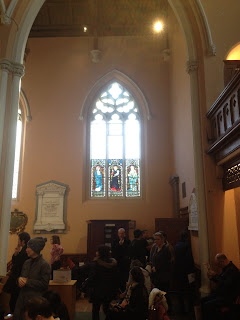 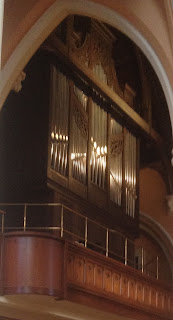 The audience was pretty big. I suppose they had a good idea of how many would attend, and the place was filled. 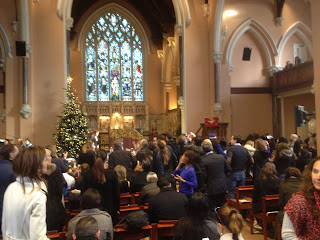 The play started. The heroes of the story were Sam and his friend Mouse. A dozen children filed down the aisle to the front and gave us the first song. They were dressed as Wild West cowboys, which slightly surprised me as I thought I knew the story, and cowboys aren't in it.  Because I don't think Wild West cowboys existed 2000 years ago, but hey, what do I know about this - other elements of the story are more improbable. So the cowboys sang a hoedown, and then Sam and Mouse explained that Sam's job is to keep the stable clean - he works hard and isn't appreciated. 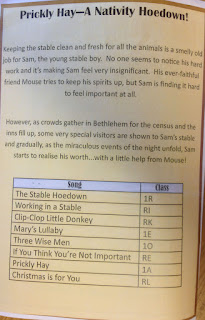 The play progressed - short lengths of dialogue were interspersed by teams of kids, class by class, trotting down the aisle to deliver their song. Some of them were dressed as sheep, some as horses or camels,  there was an excellent team of angels and the story unfolded. Mary (well played by a little girl who I'm sure was jewish) and Joseph (who from his name Kei Endo would probably be japanese, so possibly Shinto) arrived at the inn and were told by the innkeeper (played by Vikramaditya and I'd guess Hindu?) that they were full, but they could have the stable. Sam's stable.

So they bedded down there, and I think I might have missed an important part, but suddenly there was also a baby (whereas in my experience it takes the best part of a day for a baby to appear), and Mary was uncomfortable because the hay was prickly so they went outside and saw a star, and that's when the three wise men (actually two wise men and a wise woman) appeared, with grandson.1 as one of them, carrying a huge gold brick.

The gifts were gifted (and a song sung) and Mouse had the idea of replacing the prickly hay with softer hay, so the family would be more comfortable. Hence the title of the play.

I suspect that the author of the play might have confused hay with straw. Straw can be prickly, but hay is dried grass.  But never mind.

The play concuded with the song "Christmas is for you", which I agree with, then the headmaster thanked the staff, the parents, the musicians and everyone else who helped for all their hard work. Then the vicar thanked god, who hadn't actually done anything, but I suppose that's the vicar's job.

After the play, we all went to the Science Museum, where I renewed my friendship with the Newcomen steam engine, Puffing Billy and the Rocket.
.