I went over the Queen Elizabeth bridge, always a treat, on my way to Sittingbourne. And since they abolished the toll booths, it's quicker to get across. I just topped up my "Dart Charge" account, which was at £4.99. I don't understand how it could have become an odd number. Oh well. Computers, eh?


I planned to do the series TT1, with the possibility of doing TT2 at the same time. In the event, it took me until 4pm to do TT1, so I only was able to do a few extras before it was time to depart. 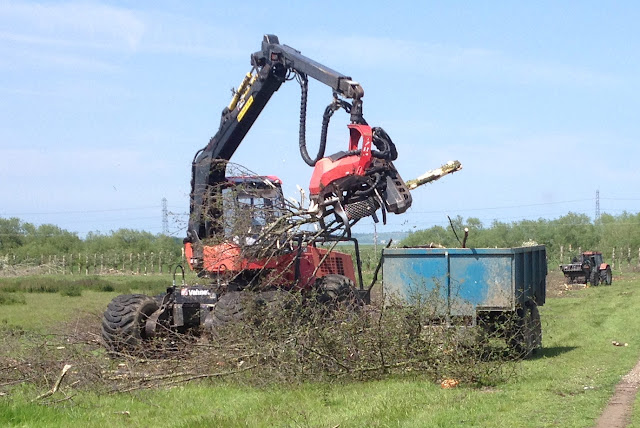 This was a magnificent machine that I saw along the way - one of the caches was just a few yards from where it was working.

What it does, is pick up a felled tree, grip it with toothed rollers, roll the tree along, thus stripping off the side branches, then a chainsaw comes down and cuts through the tree, and the log falls into the trailer. It was very addictive to watch!

The other notable thing, was, I heard a cuckoo, or even cuckoos. I tried to record them on my phone, but it isn't sensitive enough to pick up the sound.

Last year, I didn't hear a cuckoo, and when I  looked into this, it seems there's been a catastrophic decline in cuckoo numbers.