Hatley Heart attack, the last of the series

I went out today with my newly fettled bike, to pick up the rest of the series (except the finals).  A rather tiring day, because I went a long distance; this is the first time I've run through both of the 20 AH batteries - fortunately, I also had a 10AH as an emergency spare.

I had just done a Trigtastic, and I was sitting on the bike on the road, looking at the map, working out where to go next, when I noticed a man striding purposefully towareds me. You know that walk? "I'm important, and I'm going to say something important to you."
He was one of a shooting party; they had guns and dogs and those green jackets.

So I put on my "I'm just a stupid peasant" smile, and said "hello".

"Are you cycling around here," he asked. I blinked, looked at my bike, and thought that it would be foolish of me to deny it, what with the bike as a silent but eloquent witness, so I said "Yes. Yes, I am." He pointed north, in a direction where there is no public right of way. "Did you just come down that track?" "No," I said, truthfully, I didn't." He looked at me accusingly. "How come your bike is all muddy., then?"

I looked at the scotch egg he was eating. I didn't think there was much chance of me being given a bite of it, so I didn't ask, but I did the thing that cats do, which is to gaze optimistically at the food and attempt to implant the idea in his head that he should offer me some. "I went along a muddy track," I explained helpfully.

He frowned, trying to absorb this complex information. "Did you come from over there?", and he pointed in the direction my bike was heading towards. So I pointed behind me, "No, I came from over there." At that point, I decided that my attempts to share his scotch egg weren't going to work, so I said "And now I'm going. Cheerio", leaving him standing there none the wiser about who I was, where I'd come from, where I was going, and exactly what criminal activity I might be up to. The game is called confuse-a-muggle, and it's rather fun.

I found 67 caches today, which is a good number, being the same as my years. This is one of the sights I saw. 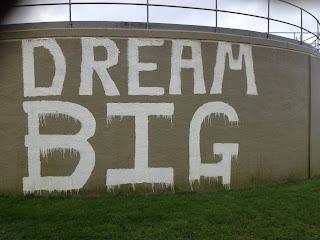 This was about 30 feet high!