Another trip today, and this was to do a part of this series that has just appeared!

After the first few caches, I was faced with this. 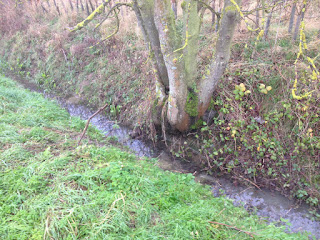 I was on the grassy side of the ditch, the cache was on the other side, the water was about 15 inches deep. I leaned over to hold on to the tree, intending to hold it while I bent over for the cache. But the ground was steeply sloped, muddy and slippery, and I started a slow but inevitable slide downwards. I realised that wetness was inevitable, so I quite deliberately put my left foot into the ditch; the water was sufficiently deep to overtop my boot, so I spent the rest of the day with a wet foot.

I got the cache, though!

And then I had a lot of trouble getting out of the ditch, but eventually I managed to get myself up without getting my right foot wet.

Several caches later on, I had a similar problem. But this time it was easy, because I didn't care about putting my left foot into the water - it couldn't get any wetter!

I finished the day by picking up two caches that I'd DNFed before, for a total of 48 finds.