A day of a dozen disasters

Today was another bite at the Hatley Heart Attack. But things soon started to go wrong.

1. A traffic jam on the M25 meant that I was an hour late in starting.

2. When I got the bike ready, I fiound I was getting no power. I tried various things before finally giving up; I was planning to walk the route, which I probably can't do, because of my foot problem. But just as I was taking things apart, I noticed that a connector had come adrift. When I fixed that, everything worked!

3. So I set off down the bridleway. The ground was very soft and soggy, making for a difficult ride. There was a hedge, and I could have gone down either side. Of course, I chose the wrong side, and had to back track.

4. I forgot that I needed to collect letter values from the "Quizzical smile" caches, so I missed the first few. I went back and got the first one, and I think I might now have enough to work out the final.

5. After a few caches, I noticed that my back tire was almost completely deflated. Luckily, I carry a pump (it isn't luck), so I was able to pump it up. I suspect that the problem is the tire pressure valve cover, it's letting air out.

6. I was doing a series, "Quizzical smile". I got one of the puzzles wrong, which took me across a muddy field, caking the bike in clingy mud. And in the middle of the field, I realised that this wasn't working, had another look at the puzzle, re-solved, correctly this time, and had to backtrack about a mile to collect the cache.

7. By now, it had turned really cold. I had six layers of clothing on top, three layers on my legs and two pair of socks. But my feet were still getting cold.

8. I took a picture of an unusual notice. I ate horses no dogs 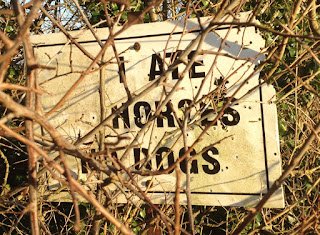 Then I saw the view from there, and tried to take that, but the iPhone hung, which is a potential problem, because that's  my backup plan for if I break a leg, or my GPS stops working, or if I just want to get the most up-to-date infor from the geocaching web site. When I plugged it in back home, the iPhone rebooted, and it's behaving itself now.

9. Then the freewheel on the bike started playing up. The effect, when it was fully non-operable, was that I couldn't pedal; turning the pedals didn't transmit any power to the back wheel. So I was going along purely on battery power. Luckily (it isn't luck), I kew that I had enough to get me round the circuit back to the car.

10. And then the back tire blew. The inner tube valve came off the inner tube, leading to a sudden and total deflation. The only fix for this would be to replace the inner tube. Luckily (it isn't luck) I carry a spare inner tube and all the tools I need to change it - I've had to do this once before. But I weighed up the pros and cons. Against changing the tube, there was A) the back wheel and tire were caked in slimy mud, which meant I'd get mud insire the tire, and I'd have to redo it when I got home. And I was only two miles from the car. So I walked the bike for about 800 meters, to where the bridleway met the road, and chaing it up to a tree. Then I continued on foot bak to the car, and then drove round to pick up the bike.

11. And somehow, while doing all that, I lost my left glove, which isn't too big a problem, because it was pretty much worn out anywy (holes have appeared).

12. When I got home, I needed to power wash the bike to get all the clingy mud off, so that I could fix the freewheel and tire on a clean bike. But the external water tap was frozen up. I had to use the other external tap (near the kitchen), which meant wheeling my wounded bike all the way round the back.