How to address the US shootings problem 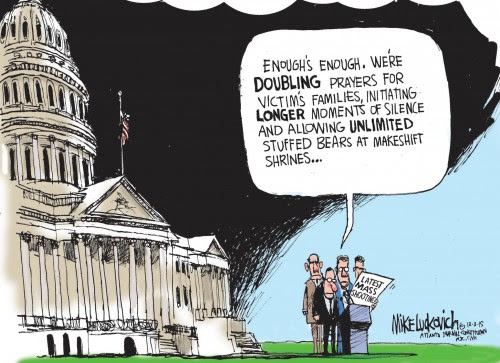 Many politicians seem to think that prayer is the answer. If it is, then it hasn't worked so far, but this might just mean that we haven't prayed enough. Mark 11:24, "Therefore I say unto you, What things soever ye desire, when ye pray, believe that ye receive them, and ye shall have them." Many other religions believe in the power of prayer, but the fact that it hasn't worked so far, might be because we've never set up a major project to try it.


I have an idea.
One of the great characteristics of humans, is tool usage. My proposal, is to apply that to prayer.
The computer is the obvious tool to use. We make one file which is a list of gods; as more gods appear, we can extend the list. Also, we would commission research to detect previous undetected gods - the various theological colleges would, I sure, be delighted to submit research proposals..
The second file is a list of prayers; again, as more prayers are developed the list can get longer. Employment could be found for many otherwise underemployed religious leaders in prayer development, testing and debugging.
The computer would combine each element of list 1 with each element of list 2; it should be possible to pray at the rate of at least a thousand prayers per second. This means 86 million prayers per day, and if that isn't enough, we can add more computers to the task.
The prayers would, of course, be sent to /dev/null, just like all other prayers.
Posted by drsolly at 19:17