Wheaton College is a fundamentalist Christian college in America (where else?). They've just put Larycia Hawkins on "administrative leave". Why? 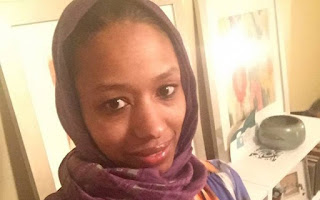 Most of the articles I've read about this, show the picture above, and say things like "after she wore a hijab". Which implies that wearing the hijab was the cause. But it wasn't.

This, to a fundamentalist christian, is anathema. Heresy. She's lucky they aren't burning her - they stopped doing that quite a while back.

A) Fundamentalist Christians do not believe that Allah and Jehovah are the same. Saying that they are, is heresy. Wheaton's dogma is that Jesus is god, and since Jesus isn't Allah, she's contradicting their dogma.

B) Possibly worse, is citing the Pope as a faith leader. Not to protestants, he isn't.

By the way, a worse thing she did, in my opinion, was to ask the Council on American-Islamic Relations whether non-Muslims wearing the hijab is forbidden. If I want to wear a scarf on my head, I will do so without consulting any faith group, and I will do it even if there's a faith group that regards it as forbidden. The rules for your faith, do not apply to me.

I think that Larycia is in the wrong. If she wants to teach at a fundamentalist Christian college, she has to conform to their dogma, just as if you want to be a catholic priest, you have to accept transubstantiation (that's the thing where a biscuit and wine actually change to become human flesh and blood). If you don't accept the basic doctrines, you can't be a priest, just as if you can't program in perl, you can't be a perl programmer.

I once met a chap who used to be a priest. He decided that it was all piffle (the way he put it, "I lost my faith") so he left and became a driving instructor. Good for him!

Larycia, you must recant, recant and abjure the devil and all his works. Then you can have your job back. And no mumbled  "Eppur si muove".

Or else go work for a proper college.
Posted by drsolly at 14:04