Hatley Heart Attack is a series of 479 caches, and today was my first bite at it. I was handicapped by a bad left wrist, and although I had a sturdy splint on it, cycling was causing quite a lot of pain, so I did the morning, but not the afternoon. Even so, that came to 34 caches. It should have been twice as many.

One problem with this series, is that that it isn't a circuit, or a series of circuits. There isn't an obvious route from start to finish. 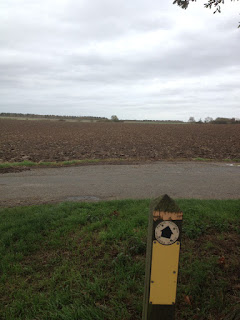 It's only 350 meters to get to the far side, but that's a ploughed field. No track, and the field hasn't even been harrowed yet. It would be a major effort to walk across it - getting a bike across would be absolute hell. I'd have to carry it! And that's about 40 kilograms, including batteries and repair kit. So at that point, I turned round and I'm planning to do the other side of that field by approaching it from the other side. I hope there aren't too many more like this!