I've had a strained wrist for the last couple of weeks. It's no big deal, and certainly not a sprain, but I did find that lifting my bike (weighing about 25 kg) was somewhat painful. So I wanted something to give it some support.

I started off with a simple white elasticated tube that I already had, but that wasn't giving much support, so I went to Ebay. I wanted very fast delivery; I didn't want to wait for something to arrive from China. So I chose only UK-based sellers. And because I didn't know what would work best, and because they were all pretty cheap, I bought four likely-looking supports. Here's what I got, and how good they were. 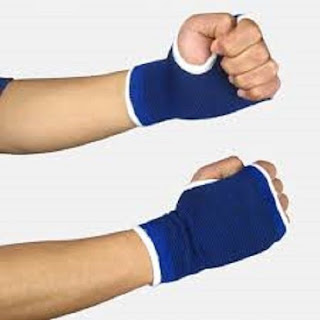 £1.25 got me a pair of these. I only wanted the left one, but the right one might be useful in the future (actually, there's no difference). It was fairly comfortable, but gave almost no support to my wrist. 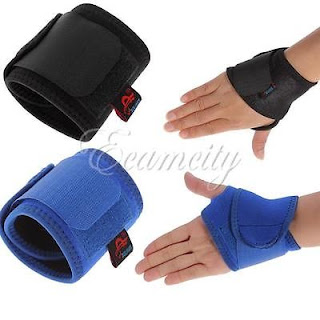 This cost £1.85, and I got the blue one. The thumb hole was too small, it gives no support, and maybe it's useful for something, but not for a strained wrist. 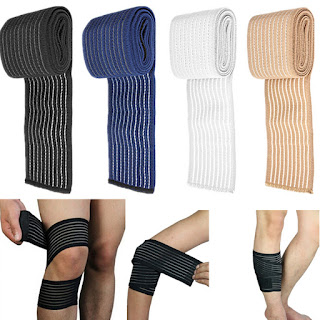 I got the longest one, 180cm, costing £3.19. That's very long for a wrist, but I was thinking I'd be able to use it in future for my ankle or knee, if needed. I got the black one. It's just a long strip, elasticated, with Velcro at one end. You just wrap it around the strained joint, and the Velcro holds it in place, but if you wrap it the wrong way, then the Velcro is on the outside and you have to redo the wrap, which is slightly annoying.

It's much better than the ones described above, giving a lot of support to my wrist. This one is worth buying. 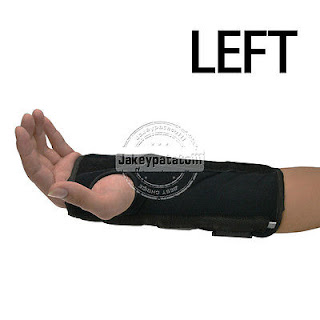 Finally, I got one of these, for £3.49. It's called a wrist brace. The product title is "Wrist Brace Support splint for carpal tunnel, arthritis or sport sprain NHS use", in case you want to search for it. I got the large size, left. Actually, it would work just as well on the right. I got the large because A) I'm a big lad and B) in my experience, things you get on Ebay tend to be sized for smaller people. But actually, the medium might have been a better fit, or even the small. The large works well, though, so I'm not going to get another one.

It give a *lot* more support than any of the others, because there's two strips of aluminium inserted along the length. This also means that to get that good support, you don't have to strap it up tightly. With the others, I found myself taking the support off from time to time, to let my skin recover from the pressure. With this brace, you can make the straps very loose, and because of the aluminium insert, you still get a lot of support.

This is the best of the four that I bought. This is the support that I'm planning to wear next time I go out caching, although I'll also carry the wraparound, in case wearing this brace interferes with biking.