I parked at the car park, and got the bike ready. I bagged the cache near the car, then I set off.

In two of the first several caches, I found the Northings for the third bonus. I looked at the map, and decided that I didn't really need the Westing, there was only one place it could be. This meant a diversion of about a mile, and when I got there, I couldn't find it, which was saddening. As it turned out, I was wrong, it was somewhere else.

So I continued on, and eventually found a cache that gave me the Westing, and sure enough, it was in a completely different place from where I'd thought.

So I did 37 caches, and then the bonus for this loop (loop 2). And that gave me the final part of the coords for the Final Bonus. Which turned out to be several kilometers away.

The problem was, I'd done loop 1, loop 3 then loop 2. I should have done them in order.

So I relocate the car, got the bike out again, and went to get the Final Bonus.

When I got close to the cache, I was about 30 meters away, and there seemed to be an impenetrable barrier of brambles between here and there. I paced up and down a bit, but eventually I decided to go for it, and plunged in.

I fought my way to GZ, and I found a lovely big box. 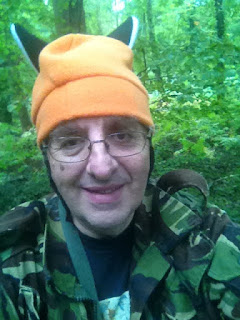 I wore the fox hat!