I saw a big circuit, 70 caches, near Amesbury, and I decided to do it today. I had a treat as  I drove towards my starting point - a great view of Stonehenge.

My first thought was to do the 70-cache series in one bound - that would mean I'd have to carry enough batteries, water and food for the day, which would have been a lot! So I changed to my usual plan - I started at cache 57, went round till I got to cache 10, the biked the two miles back to the car, along a good road. At the car I had lunch, swapped the used 5AH battery for one of my lovely new 10AH batteries (plus another one as a spare), and set off in the opposite direction, starting at 56 and finishing at cache 11.

I was especially pleased to get the puzzle in the series, because it was the sort of puzzle that doesn't give you exact coords. Instead, I drew three lines on my map, and the cache was where they intersected. And indeed, there it was!

I went through a field of cows, except one of them was a bull. He ignored me, he was busy playing with a cow. When I left the field, I saw this: 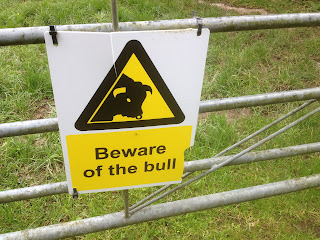 I didn't see a notice when I entered the field! Not that I'd have been deterred. A bike is a very good defence against bovines; if they get too frisky, I walk the bike and keep it between me and them.

A good day's caching, with about 30 kilometers covered.