I went west to Swindon to trundle round the Ridgeway. But before I left, I had a look at the Jellyfish cache. This is a Google Maps satellite shot of a crop circle that looks a bit like a jellyfish. I first had to find where that crop circle was (I used a combination of Google search and Google maps). Then I had to project a bearing, which took me to a place where I could get some numbers that let me calculate where the cache was.

But even before I worked out the location, I had made a guess about where it would be, so instead of climbing up a hill to get to it, I got to it as part of my circuit of the White Horse Trail, which meant that I could do it on the bike. When I got there, I had to search for quite a while to find it, but since I'd already gone to all that trouble, I was pretty determined.

The track I biked over to get to it was very rough, and halfway back to the WHT route, I heard a "CRACK" from the bike. I stopped, and examined it carefully, and the rear suspension spring had broken. After a bit of thought, and after bouncing up and down on it to test it, I decided that it would be safe to carr y on biking. And I was right, it didn't let me down for the rest of the day. But I'll have to replace that spring.

Later on, I did Wayland's Smithy, which is a long barrow. 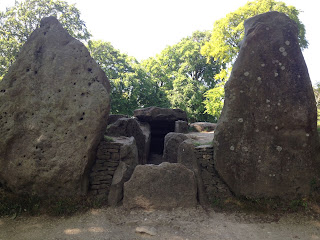 This is a puzzle cache. I could see what I had to do, but it took me a few tries before I got the numbers right.

When I got back to the car, it wouldn't start, it reported "Smart key not present", which is bullshit because I'd just used it to open the door. So I locked and unlocked the door, and then it worked. So there.