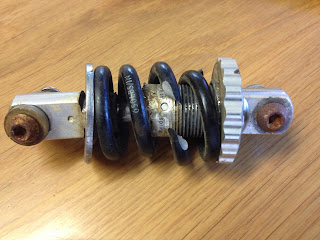 You can see the cracked spring.

Several months ago, I bought a used Haro bike, with the idea that I'd use it as a cheap source of spare parts. So today, I unbolted the suspension assembly, and used that to replace the broken part. When I examined the broken part, I found that as well as the broken spring, the bushes attaching it to the bike were broken.

I went on to Ebay, and bought a replacement suspension, it was only £5. Can you imagine what the equivalent on a car would be?
Posted by drsolly at 13:24