Sometimes, I see a story that I just can't parse. 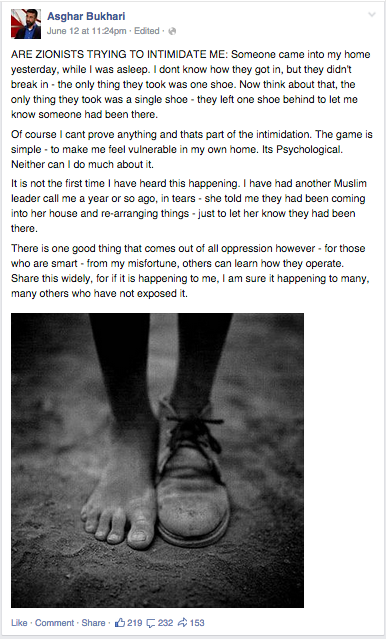 Asghar Bukhari has had one of his shoes stolen by Zionists.

So now I try to use my critical thinking skills. What's the truth of this story? Is he serious? Mistaken? Correct? I apply the "likelihood" test - what is more likely, that an unnamed Zionist agency sneaked into his house and stole one of his shoes in order to intimidate him, or that the explanation is something else.

He doesn't have a dog. He has a cat, but no cat flap. The shoe has gone, and we don't have a good explanation. Perhaps god did it?

Here's the only way I can make sense of this. It's the Zionists, of course, because everything is the Zionists. and one of them is pretending to be Asghar Bukhari and is spreading this story in order to make him look silly.

So you might as well give him his shoe back.
Posted by drsolly at 23:01