A history of networking

In the beginning, there was the floppy disk. If you wanted to move data from one computer to another, you put it on a floppy. This was tedious and slow. And, by the way, it was the main way that viruses spread at first.

Then in 1988, Madge Networks loaned me a few token ring cards, a hub and the necessary cables, and I networked together my IBM PC, my PC clone, and my Amstrad 1512, which I bought because they weren't loaning them out for reviews and I made enough by writing a few reviews of the computer to pay for it. The reviews were not kind.

I loved that token ring, I learned how it worked, and invented a dance to illustrate it, which I used for teaching on my networking seminars. It ran at 4 mbit; these days, that would be considered slow for a home internet connection. But compared to floppies, it was well fast.

But even better; I could use it to share our single laser printer, and I used to to develop the software that we used to run the business.

Then we moved the business to our first premises, at Water Meadow. We had downstairs, where the sales, admin and tech support was done, and upstairs, where we did data recovery and other such advanced stuff - in those days, we were the only data recovery service in the world. And the only computer forensic service. The token ring was downstairs, mostly running Dataease, the database that I'd set up to run the business. Upstairs, we didn't have a network at first.

To do a data recovery, you first get the drive working (we used various techniques such as "magic finger", a technique that I invented that involved pressing your finger in just the right place and twisting is slightly), then you copy the drive, sector by sector. We copied onto a Bernoulli Box, which was really just a big floppy disk, about 20 mb in size, just right for the 20mb drives that were our bread and butter. Then, with the image on the Bernoulli, you could work on it without having to worry about using a failing drive.

But then someone realised you could get 30mb on a 20 mb drive by using an RLL controller, and the Bernoulli wasn't quite as handy.

There's a place in Harrow that sold stuff. Computer stuff. It was like an Aladdin's cave in there, only for computer stuff. I'd go in there occasionally and wander around. And one day, I spotted this.

It's a Torus ethernet card, vintage 1987. Full size, 8 bits, coax connector, top speed 10 mbit. They had a few of them, but no software, which made them pretty useless. But I was hopeful, and made a very good deal with the shopkeeper, and came away with several of them. I searched around, and managed to find drivers, and so we set up an ethernet network in the upstairs section of the office. We used a 70 mb hard drive on the server, and we would image hard drives to that.

Backup was to half inch magnetic tape; it was a huge box that was connected to a PC, which I'd got so that we could bid for a job to undercut someone's mainframe computer department; we'd read a tape each month, process it, spit it out onto Lotus 123 spreadsheets, and mail it to the customer. That job more than paid for the tape drive, and since it was there, it was an obvious device for backups.

So for a long time, we had two networks. Token ring at 4 mbit downstairs, ethernet at 10 mbit upstairs. On the strength of this dual experience and expertise, we picked up a few consultancy jobs, a useful extra income, and it was always fun sorting out someone else's network.

But we outgrew Water Meadow, and moved to a much larger premises. We still had downstairs for admin and upstairs for tech, but we switched to ethernet on both, using cards like this: 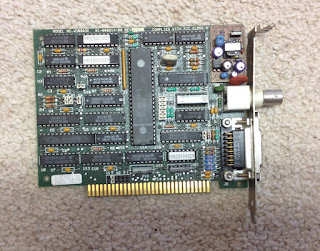 Still 8 bit, still coax, but much smaller; this one is Western Digital.

The problem with coax, is that it's a ring. Each computer is connected to the next one in the ring, which is OK if you're making something permanent, but not so good for things that change. By that time, I also had a coax ethernet at home.

The big change came in 1997. I got fed up with the slowness of 10 mbit (everything feels slow once you get used to it), and I wanted 100 mbit. So I ripped out all thaose coax cables, and replaced them with CAT 6, which is a thin, flexible wire, and it's a star. You have a hub in the middle, and each computer is connected to that hub, and if the hub hasn't got enough ports, you connect the hub to another hub, and then you have another 32 (30, actually).

And then I realised that a switch is better than a hub, and costs about the same, and that's what I'm using to this day.

So when I was rummaging around my old stuff looking for a router to replace the router that failed, and I found that 1987 ethernet card, it brought back some memories.