Out east yesterday. First I did a loop of 30 caches (plus a few extras). One of the extras was a ruined tower on Holly Hill. I didn't approach it via the recommended route, though, which would have needed a kilometer walk and back along a very poor path. Instead, I went down a nearby bridleway, hoping to find a way across. And I did - there was a track suitable for a bike that got me to within 80 meters of the tower. And then I left the bike, hoping that I'd be able to find it again, and plunged into the rhodedendrons. If you've ever tried to get through a thicket of rhodededrons, you'll know how difficult that can be.

Every now and then, I looked towards where I thought the tower should be, and couldn't see it, so pushed forward. Eventually, I spotted it, but well to the right of where I was expecting, and I struggled my way towards it. After all that, the find was very quick, and I found a much easier track to get back to the bike, which was exactly where I expected.

Then I did a solved puzzle and a couple of others, but as I was working my way towards the next cache, there was a "road closed" manned by a couple of police. Rats. So I went after some different caches, and eventually worked my way into Faversham, by which time it was dark. I parked, got the bike out, put my lights on, and did a few caches around there, and finally a Whereigo, "Finding Faversham Further".

To do the Whereigo, I used the iPhone 4. I tried to do one a while back on the 3, but the lag between movement and the iPhone recognising the new position is simply much too long. It was a case of move, wait five minutes, move and so on. With the 4, it's vastly better. I downloaded the "cartridge", and ran it. It asked me to go to a nearby Methodist church, but it didn't say how to get there, and the arrow on the Whereigo isn't as good as on a GPS. But I found it, answered the questions correctly, and it gave me a new place to go.

It sent me all over Faversham, and at each location I had to answer a question before I could get the next location, and I started to wonder how long this would go on. But eventually it took me to the last location, and gave me a code, which proves I've completed the journey.

While I was in Faversham, I saw this: 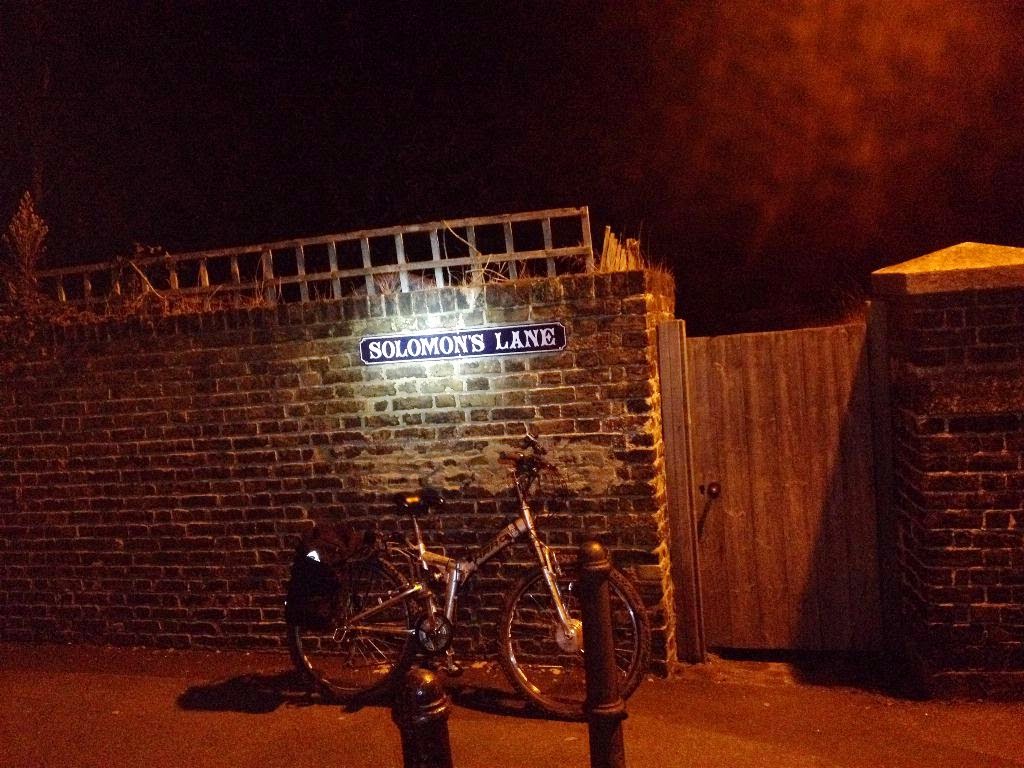 And that's my bike leaning on the wall.