Driver cable for the bike.

I have EC5s on all the batteries. I use EC5s because they'll carry a *lot* of current, they solder on easily, you add the plastic housing after you've soldered it (so you won't melt the plastic while you're soldering) and they plug in and unplug without needing a big fight. Female on the batteries (and things offering power) and male on the things accepting power. They are impossible to plug in the wrong way round; you can't plug a negative into a positive, if you soldered the plug up the right way round.

The resistor in the circuit means that as soon as it's plugged in, the batteries slowly (a couple of seconds) charge up the capacitors in the controller, so you don't get a big spark. That saves the contacts on the switch. The switch is a domestic contact breaker, rated at 53 amps (so it should switch power off if there's a short circuit). £2.79 on Ebay, http://www.ebay.co.uk/itm/Gewiss-Series-90-GW-92-MT60-Type-B-Single-Pole-MCB-/180950744687?pt=UK_BOI_CircuitBreakers_RL&var=&hash=item2a21813e6f

The shunt needs to be 0.75 milliohms. That's four inches of 10 AWG wire, you can work out how much you need if you use a different guage from this: http://www.powerstream.com/Wire_Size.htm. The ammeter/voltmeter sits on the handlebars, so I can see at any time, how much current I'm pulling, and the battery voltage.

The wattmeter is Ebay http://www.ebay.co.uk/itm/Digital-LCD-DC-60V-100A-Balance-Voltage-RC-Battery-Power-Analyzer-Watt-Meter-/201051715341?pt=UK_ToysGames_RadioControlled_JN&hash=item2ecf9db70d, expect to pay between £8 and £9. I have that down with the batteries, because it's easiest to put it there. I use it to tell me how many amp-hours the battery has done since being connected up. I use 5ah batteries, and I'm getting 4.5 ah or so. The batteries will slowly deteriorate over time, so when they only give me 3ah, I'll replace them.

The "battery to power voltmeter/ammeter" is a holder for four AAA batteries with a little switch. I run it until the AAA batteries are dead, then recharge them - this means that I could be without my ammeter/voltmeter display for a little while.

The series connector is just two EC5 males in series, connected to an EC5 female. It's just as easy to wire up three or four, depending on how many batteries you want in series to drive your bike.

As well as all the usual wiring on the bike, I have an ethernet cable going from the battery pack to the handlebars. That has 8 conductors; four are for the ammeter/voltmeter, two for a 5 volt power supply that feeds my PDA (which I use for navigation) and the other two will be feeding a headlight when I install it. The 5 volts comes from a step-down unit that runs from the bike battery, and the headlight will also be fed by the bike battery. 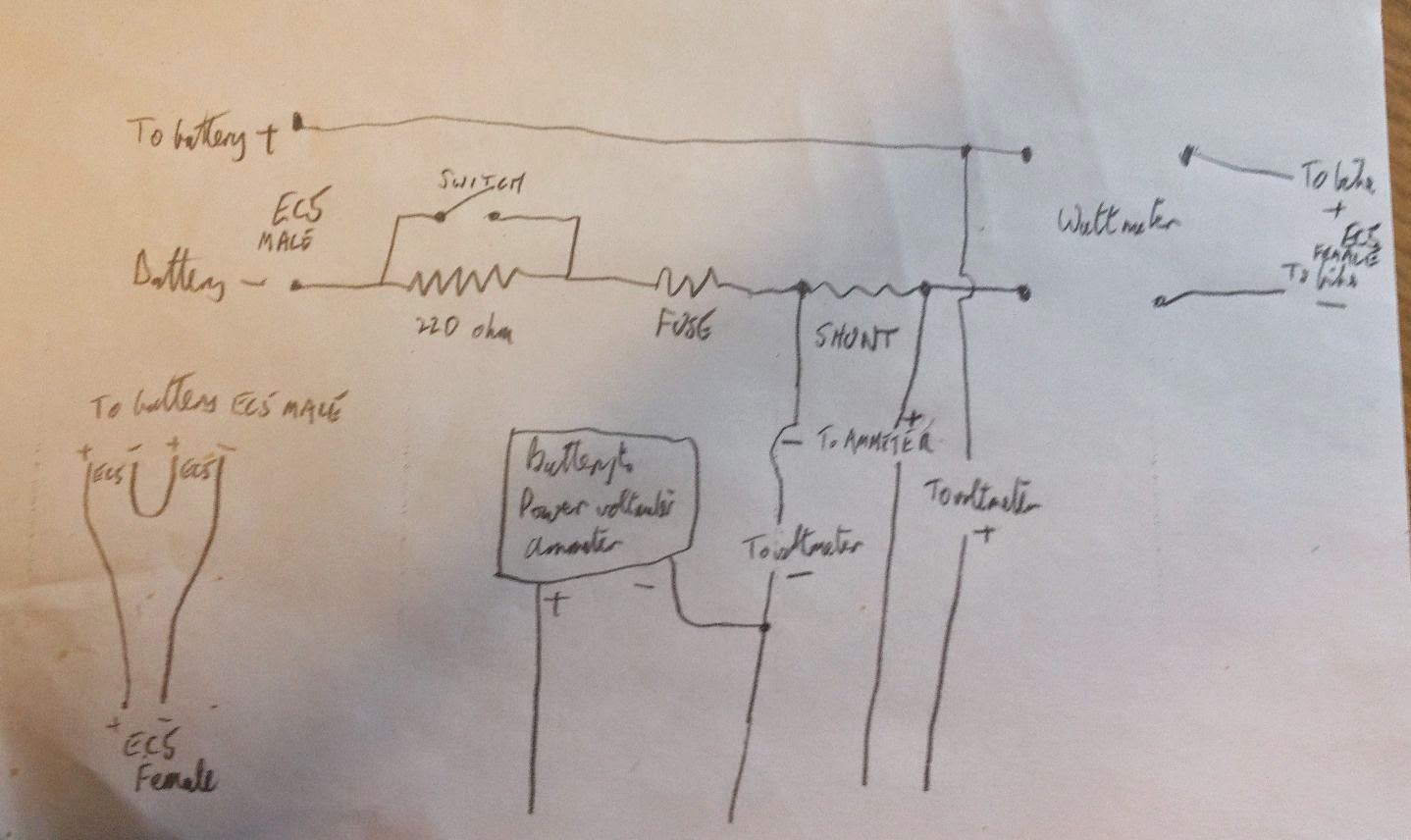