With some very helpful advice from the pedelecs.co.uk forum, I took the motor apart; it turned out that I'd tried to dismantle it in the worst possible way, the right way was actually quite easy, I just needed to unscrew six screws holding the motor together. The only difficult bit has been dealing with the circlips, but that's because I don't have circlip pliers, and that should be remedied real soon now, courtesy of Ebay.

The problem was, indeed, the gears. 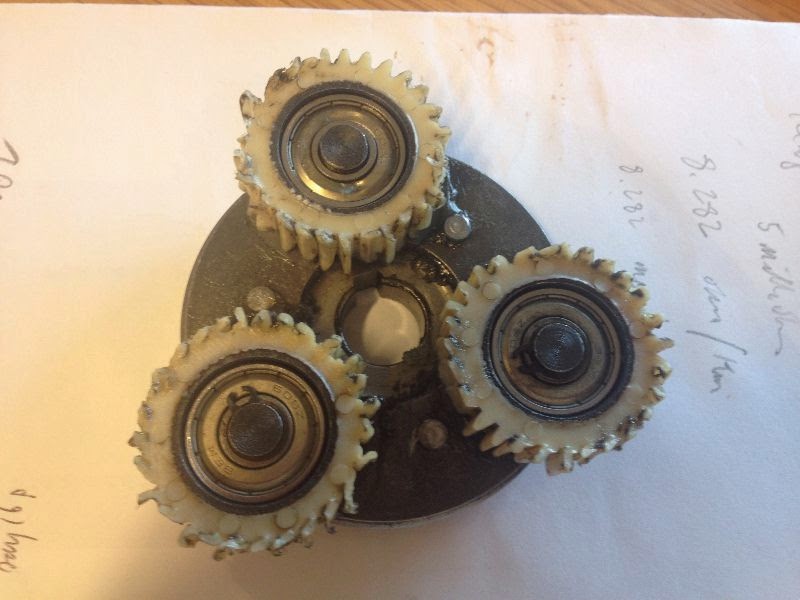 The gear wheels are plastic, and they've been totally destroyed. I guess I put too much torque on them. Lesson learned, maybe. I say "maybe" because I do like to have a lot of torque, that's what gets you up hills and over soggy ground.

So I took off the gear (as you can see above). I can get a new one from Aliexpress for £20, including postage. If you've never heard of Aliexpress, it's the biggest web site for buying things in the world, selling stuff made in China. And there's a bike shop in Southend that might have one.

But while I was looking at the destroyed gear, I remembered that I have another one just like it, inside a bike motor that I stopped using because the bearings were very loose. So I dismantled that motor, took out the planetary, put it in bike.4's motor, and now bike.4 is reassembled.

I haven't tested it yet - I have some more modifications to do. The vendor of the bike controllers that I'm using (em3ev.com) told me that the problem with using them at 24 volts, is that they're designed for 36 volts and above. But, he said, I can open them up and modify them. All I need to do is replace a resistor, with one of a lower resistance, and I've looked at it, and it does look like something I could do.

So I've ordered resistors of a value such that I can modify the two controllers that need it, and as they're coming from the UK, they shojld arrive this week.