I've been doing a lot of reading, and I think I could give it 50% more volts. 12 cells in series, 50.4 volts when freshly charged. It might not work, the controller might refuse it, but I don't think that the motor will explode - at worst, it might get hot, and I can keep an eye on it and stop if it gets too hot to touch. The rule of thumb in such matters, is that until it's too hot to touch, you're fine. I've also bought an infra-red gun thermometer, so I can check temperature without touching it.

It's easy for me to try this; I just have to wire up a harness that puts three of the 4-cell batteries in series. And I'm trying this on bike.3, because it has my least favourite motor, it's a motor without Hall-effect sensors. Meaning, if I blow up that motor, I'll be sad but not devastated.

The first thing I noticed, was that the rear brake doesn't work. Fortunately, I discovered this before I got on the bike, while I was still checking it out. On the other hand, the front brake does work - isn't it a good idea that bikes have two brakes!

The rear brake is a disk brake, and the problem was that the cable wasn't moving in the cable outer sleeve. I tried oiling it, but that didn't help much, and eventually I replaced the cable inner, and now the rear brake works OK.

Before I can make up the wiring harness, I need connectors. I'm not sure whether to use Deans (T-connectors) 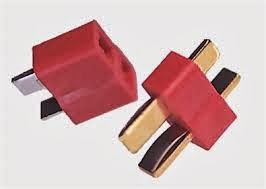 or the more recent replacement for them,  XT60s. 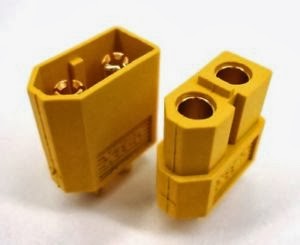 I'll experiment with both kinds before I decide what to use. Right now, I'm using kettle plugs and sockets, and they do meet all four of the criteria above, but A) they're a bit big and bulky, and B) they're only rated for 13 amps, and I thought they'd be carrying about that, but actually my wattmeter tells me that 30 amps is going through them, and they are feeling just slightly warm. The Deans and XT60s are rated for 60 amps.

I'll need thicker wiring, too. The wiring I'm using now is also rated for 13 amps, so using it at 30 amps is a bit cheeky. I have reels of thicker wire; 2.5 sq mm, and 4 sq mm. Different authorities give different carrying capacities for wires, because it depends on how well heat can leave the wire, but they go (for 4mm) from 30 amps to 100 amps. HobbyKing (who I feel are fairly expert in this) say that you can put 70 amps through 14AWG (which is 2.08 sq mm), and 2.5 sq mm should be able to carry somewhat more than that.

So I checked it in my Fowlers Electrical Engineer's Pocket Book, 1943 (price 4/- and a very good four-bob's-worth it was too, and if you want one, I see they're available on Ebay and Amazon). I inherited mine from my father, and page 503 is showing 50 amps for the 4mm, and who can you trust if not Fowlers? And the 2.5 mm would therefore be good for 35 amps, which means that I can safely use the 2.5 cable, because I'm actually expecting to run 15-20 amps if I use 12 cells for 50 volts, and it should also be good for trying 16 cells (67 volts)  which I'm thinking might go to 30 amps.

So I've ordered connectors, and they're on the slow boat from China right now.