This, of course, is cockney rhyming slang; it's the first word in "cobblers awls". I don't have an awl, but I do have a boot which has lost one of its lace-holders. I think it's a common problem with the Hi-tec Eurotrek, because I've heard of two other people who have had the same problem.

Possibly, if I sent it back to Amazon they'd replace it, but the boot is a some months old now, so maybe not.

It's the left boot, and it's the top lace-holder on the left. I think that's probably the weak one; maybe it takes more stress.

The first problem happened when it bent and was no longer holding the lace. I fixed that in the field with a pair of pliers. But then it happened again while I was in Salcey Forest. I did a work-around of using the second highest lace-holder twice, but that's not really ideal.

I like these boots. THey're comfortable, and they're actually waterproof (as distinct from some waterproof boots which aren't). So I'd like to keep using it.

Today I had a look, and I did a more permanent repair; I didn't use an awl, I used a small drill. 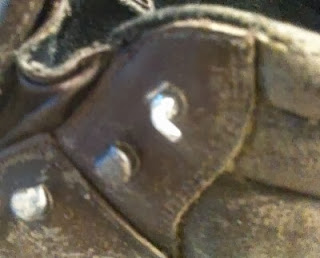 You can see the two lower lace-holders, and then above them, you can see the small bolt that I put in; a washer on the inside, and a self-locking nut on the outside. Then I bent the bolt so that it would retain the lace - I started the bend with pliers, but finished it off with a hammer, using a bench vice as the last. I feel confident that this will work, and none of the other lace-holders have shown signs of weakness.

And I've ordered another pair of the same boots from Amazon, for £45. A good pair of boots in Foxes would be more than double that amount.