Today it rained, snowed and froze; I stayed at home. I did some work in the computers, and then I modified two of my bike batteries.

I'm no longer using the battery holder that comes with these; the problem is they just aren't strong enough to take the weight of the battery on rough ground. The jouncing around slowly wrecks the holder. But who needs it anyway? Getting the battery in and out of it was always a big deal, because it was very tight, and needed to be levered on and off. What I'm doing now, is putting the battery in a rear pannier. It doesn't cause a problem there, my center of gravity is a bit lower, and it's easy to remove when I need to lift the bike over an obstacle.

But until recently, I was connecting the battery to the bike using a pair of prongs that go into the battery, Here's the female part: 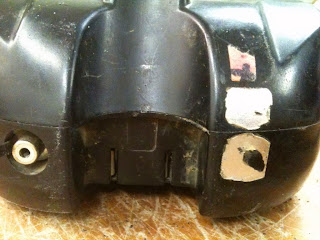 The male prongs slide into the slits at the bottom. There's two problems; 1) it's easy to put it in the wrong way round. I discovered empirically that this doesn't make anything blow up, but it can't be good. The second problem is that while I'm riding along, the prongs work loose from the battery and I lose power. I have to stop, get off, and delve about in the pannier to reconnect. And my wattmeter loses track of how many amp-hours have been used. 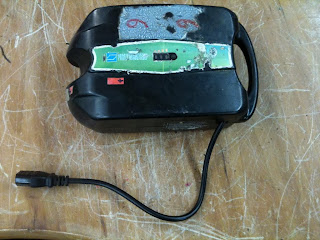 I opened up each battery, and soldered the leads of the kettle plug to the power connector inside, and the wire comes out of the battery via a small hole in the shell. This reduces the waterproofness of the battery, but it never was very waterproof, and now that it's sitting cosily in a pannier, that won't matter.

Two advantages. 1) It's impossible to plug it in the wrong way round, so I no longer have to think about that. 2) The male plug stays firmly in the female socket even when riding over the roughest ground. And because I've chosen to have the female at the battery side, it would be really difficult to cause a short circuit. Which would be annoying, even though there's a fuse in the battery to stop it from becoming catastrophic.

I've now done this to all three of my old batteries, as well as to the Hobbyking batteries.