A tough day out

This started well. I went out to do "Another King's and back". I loaded up the bike with battery 6 and one Hobbyking battery, and set off.

The second cache wasn't there. It had a very specific hint, so I replaced it. Then I couldn't find number 16. But the big catastrophe happened as I went from 23 to 24. The map showed a bridleway, the signs said a bridleway, but on the ground was just a field of loose earth. That's the worst kind, because it clogs up the bike so badly that I can't even push it.

So I tried to go round it, on the field edge. That took me quite a long way from where I wanted to be, and I still had to cross a few hundred meters of loose earth, and sure enough, after about 20 meters, the bike clogged up. It was so bad, that eventually the only way I could make progress was to carry the bike, and that bike, including batteries, is HEAVY.  And it's an awkward shape for carrying, the pedals get in the way, and it's not balanced ...

So after 200 meters, I got to cache 24, but then my knee was hurting as of a sprain, although I don't remember spraining it. And I had another 100 meters of loose earth to cross, one painful step at a time.

Eventually, I reached the safe haven of the grass at the edge of the field. And by that time, the bike was so totally clogged up that the rear brakes couldn;t work.

After that, things weren't too bad, but I got back to the car a lot later than I'd planned, my knee hurt, my back hurt from the carrying, and I was exhausted.

So after lunch, I went home. Only 29 caches done today.

On the plus side, I found 3p in the road by the car when I got back. 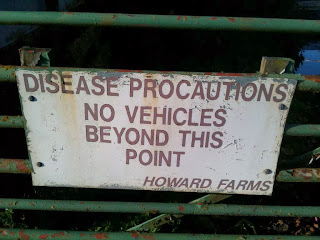