Last time I went up to Whaddon in Cambridgeshire, I did 50-odd caches, but that left plenty more to do. So today, I went there again to finish the area.

First, I did a puzzle cache. Solvng it was a three stage process. I got the first stage immediately, the second stage came out after a bit of crunching, but that left me with two large numbers and no idea how to turn them into coords. After bashing my head on it for a while, I emailed the Cache Owner, who gave me some help which didn't do me any good.

But this morning, I had an idea, tried it, and it worked. So I was able to go collect the cache, and after putting so much effort into solving the puzzle, you bet I wanted the cache!

I parked in someone's industrial area (there were other cars there, so I didn't think anyone would notice) and walked to GZ, where I spent several minutes getting prickled before I finally looked properly in the most obvious place, and there it was!

Then on to the first circuit of the day. That started in Meldreth, then went north, on the bike. I was trying out my idea of using the batteries in pairs rather than in fours, and it worked well. I got 9 km out of each pair.

After the first dozen caches, I'd planned to go on a track across country, but when I looked, it was the dreaded ploughed field with loose earth, and that's anathema to bikes. So I stayed on the road instead, I though, OK, I won't do the five that are along there. But as I proceeded north along the road, I saw a way I could cut west to the track I'd wanted to be on, and it was all on grass! So I took that, and was able to collect the five that I'd given up on.

I crossed the meridian a several times today. And there's proof! 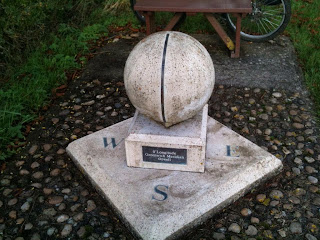 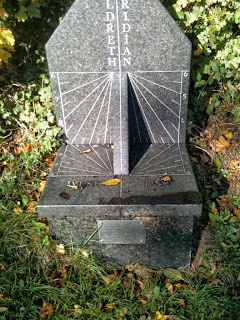 So I did 25 caches, and it was 2pm, I was biking back to the car, and I got caught in a downpour. I got soaked. All over. 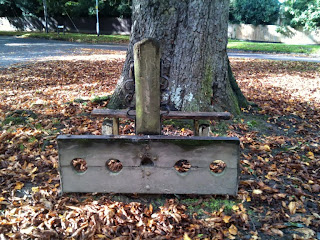 Back in the car, I consoled myself with hot coffee and lunch, and thought about giving up for the day and going home. But the sun came out, I put on a dry coat and gloves, and did another small circuit of 11. Again, at one point I was faced with a ploughed field which NO WAY would I even try to cross wheeling the bike, but I was able to find an indirect route that got me around it.

Back to the car again, and another battery change. Then off to Shepreth, to do the Shepreth Saunter, or at least as much of it as I had time for, which turned out to be all of it! So I wound up with 73 caches done today, and no DNFs. A very good day out.
Posted by drsolly at 21:05