The day we arrived, we had dinner early. Conversation was mostly about bridge, so I read a book. After dinner, I went out to Lancing and went round on the bike, picking up 12 caches (one was nearly a DNF, but I had another look, and there is was).

On the Sunday, I went to Arundel and did a 17-sized circuit. At one point, I lifted the bike over an electrified fence, and got a nasty shock. Then I realised that I didn't need to get over that fence, I was going off in a different direction. Grrr. At lunch, you can probably guess what the conversation was about, and my reaction.

So, a total of 80 caches over the weekend, and a lot of fun. I got very muddy, and I got soaked on each day by sudden heavy rainfall, plus lot;s of drizzle to keep me moist.

I used my wattmeter on one of the older batteries, number 8. That told me that I got 7.5 Ah out of it when running it down to empty, and it's supposed to be 10 Ah. Either the battery doesn't have the puissance it claims, or else it's got old very quickly.

They get some heavy floods around here! 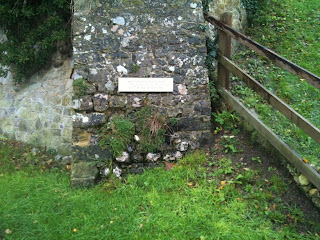 I found this chap while doing a cache near a phone box. 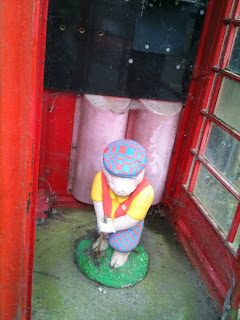