Ladysollywas going to Lyme Regis with three of her chums to play bridge, so I was inveigled along; the plan was that she'd use the Devil's Bible while I went out caching.

The first day went well. We drove down to Dorset, and had lunch at a Papa John's along the way; I had two rather good small pizzas. We found the card-playing venue (a mobile home in a trailer park), then dropped off our luggage at the B&B we were staying at. Then I went off caching. I did ten caches, including a solved puzzle, and a series that built up to another puzze. A third solved puzzle defeated me - the footpath that should have taken me to it, just wasn't there. Or at least, if it was, I couldn't find it. And it was too late in the day to approach from the other end.

Here's a view I took that evening. 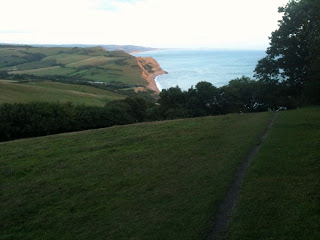 The next day, ladysolly trotted off for a full day's cardplay (although later I was told that they'd also gone in to Lyme Regis for a nosh-up). Meanwhile, I tackled a rather nice-looking series "A Hell of a Walk", which also mingled with two other series. And it was all on roads, byways and bridleways, so ideal for biking.

Or so I thought.

It turns out that the area isn't exactly flat, not like Essex, Cambs and Hunts. But worse, the track called "Hell Lane", (hence the name of the series) was not good for bikes; it wasn't merely very rutted, there were places where getting a bike through was quite an effort.

This might have given me a clue about what was to come ... 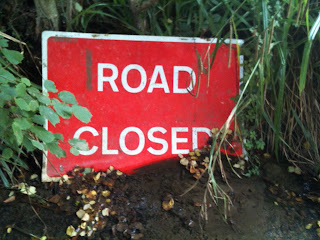 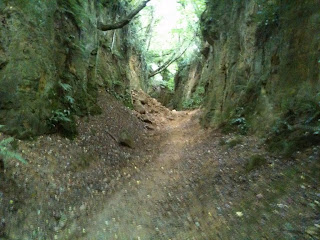 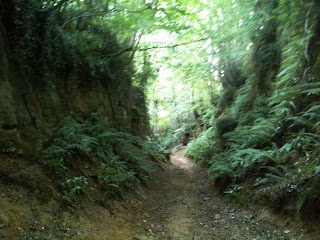 The flood in Hell Lane 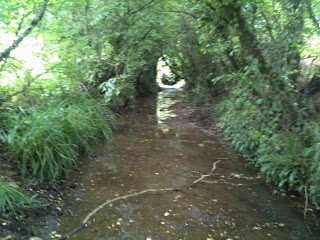 But I pushed through regardless, picking up the clue letters as I went. Eventually, I had seven out of the ten, but I did some good guessing, and found a likely place for each of the two final bonuses. And one of them was right (and the other one is too, I think, but I didn't get to find out, because ...).

So, things were going pretty well, I thought, although it was taking me longer than I'd hoped, especially when one cache "under the fallen tree" wasn't because the fallen tree had been towed away by the farmer, and I found the cache, after a very long time, under a small log.

But, as I said, things were going well enough, until disaster struck. I was pootling along on the bike, saw a soggy wet patch coming up, steered for a drier part of the track, the bike toppled and I fell off. And I fell downhill, which means, of course, further to fall.

I lay there shocked for a few seconds, then checked that I hadn't broken any teeth (my mouth had snapped shut hard when I landed), which I hadn't, and then counted my arms and legs, as one does. Then I tried to stand up. Ow ow ow.

Usually when I fall off, it's no big deal. But this time, I'd fallen hard on my right leg, and my thigh was hurting pretty badly. I limped along with the bike to the next cache, found it, and by the time I'd done that and got back to the bike, I was limping hard.

And that's where I am now. I can walk, but slowly and with a stick, and with much pain.